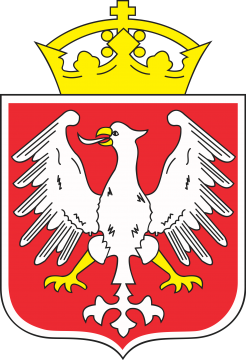 The county seat is associated with the beginnings of the Polish state. It is one of the largest cities in Wielkopolska and an important point on the Piast Trail.

The precise origins of the Gniezno grad are not known. Gniezno’s beginnings as a centre of power are tied in with Lech’s Hill.
An open settlement appeared at the turn of the 8th and 9th centuries and a two-part (i.e. in and around the grad) fortified establishment, surrounded by wooden and earthen embankments, appeared in the central part of the Hill c. 940. A later phase of extending the grad, which involved adding the next segment to the north of the compound to build a basic ducal grad, occurred during the reigns of Boleslaus the Brave and Mieszko II, i.e. from the turn of the 10th and 11th centuries until 1038.
The Gniezno grad functioned as the capital of the lands of the Polans – the “Gniezno state” – and later of the Polish state. This is where the ruler most frequently stayed. According to Gallus Anonymus, Gniezno maintained the largest army – 1,500 “pancerny” (armoured companions) and 5,000 shield bearers – during the reign of Boleslaus the Brave.
The grad may previously have been a centre of Pagan worship. One hypothesis has it that the first Christian place of worship was built on Lech’s Hill as early as the 9th century and that the proponents of the new faith were Irish monks. The first church was built in the grad compound after 966. Bishop Wojciech left here on his missionary expedition to the Prussians in 997. In 1000, the new church that Boleslaus the Brave had built around the grad was elevated to the status of a metropolitan cathedral and oversaw the dioceses of Cracow, Wrocław and Kołobrzeg. Holy Roman Emperor Otto III also made a pilgrimage to Gniezno in 1000 to visit the grave of St. Wojciech. Poland’s first king, Boleslaus the Brave, was crowned in the cathedral in 1025, as was his son Mieszko II soon afterwards.

Gniezno was sacked by Duke Bretislaus I of Bohemia in 1038. The place was rebuilt from the ruins during the reign of Casimir I the Restorer but was never to regain its former glory. Boleslaus the Bold was crowned here in 1076.
Gniezno was granted city rights by Władysław Odonic in 1238 or early 1239. It was positioned on Maiden Hill and centred around today’s marketplace. The city was enclosed by walls with three gates in the late 13th or mid-14th century. Lech’s Hill found itself outside their limits and became the place of residence of the archbishop and the chapter house.
The coronation of King Przemysł II in Gniezno Cathedral in 1295 held enormous significance for the unification of Poland. The coronation of Wenceslaus II of Bohemia in 1300 was the last to take place in Gniezno.

The city prospered through trade with the east – mainly in skins and furs – during the 16th and 17th centuries. Even goods from Siberia found their way here. Gniezno was the voivodeship capital from 1768 to 1793. It became a major centre in the fight against Germanisation towards the end of the 19th century. Gniezno was one of the first cities in Wielkopolska to regain independence in December 1918 and became one of main command posts in the Wielkopolska Uprising. The city escaped destruction in 1945 with only the cathedral being damaged.

Today, it is one of the most important cities in Wielkopolska. It is an important rail and road hub and is also an industrial centre with a state-of-the-art alkaline battery factory, a packaging machine factory and several other facilities. Several institutions of higher learning have departments here, including Poznań’s Adam Mickiewicz University and the Archbishop’s Ecclesiastical Seminary.
The city’s profile was raised by the millennial anniversary celebrations of the death of St. Wojciech and the Congress of Gniezno. Pope John Paul II made his second visit to Gniezno in 1997 (the first was in 1979) and met with the presidents of the Czech Republic, Lithuania, Germany, Poland, Slovakia, Ukraine and Hungary. The Papal Legate, Angelo Sodano, held a subsequent meeting with the presidents of Lithuania, Germany, Poland, Slovakia and Hungary on the millennial anniversary of Otto III’s visit to Gniezno on 12 March 2000. The German Chancellor and the prime ministers of the Czech Republic, Poland, Slovakia and Hungary came to Gniezno on the 28 April of that year.