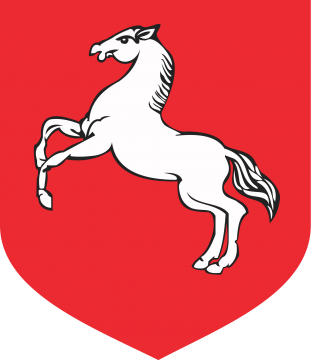 The county seat is on the Warta River about 100 km east of Poznań on the Poznań-Warsaw railway line and the Warta-Gopło canal and not far from the A2 motorway. It is the largest city in eastern Wielkopolska and an energy industry centre.

Konin has a history spanning more than 700 years and has been associated with its position as a Warta river crossing at the junction of ancient trade routes from the outset.
The foundation document has not survived but the oldest written information about the city dates from 1293 and this has been taken to be the symbolic date of being vested with city rights.
The lack of invasions and wars during the late Middle Ages and the renaissance encouraged the city to prosper. Jan Zemełka (Zemelius), a doctor of philosophy and medicine, was born in Konin during the renaissance. Zemełka founded the chairs of medicinal botany and medicinal anatomy at the University of Cracow. The development of the city was hampered by the 17th-century military destruction of the Swedish “deluge” (1655-1660) and numerous natural disasters.

Konin was under the Prussian Partition in 1793–1806 and part of the Kingdom of Poland in 1815–1918. Konin was a multicultural and multi-confessional city in the 19th century. Poles lived alongside with Jews, Germans and Russians. The city found itself under German occupation after the outbreak of WWI (1914–1918). The city regained its independence when the war ended in 1918.

The destruction of the multinational and multi-confessional make-up of the city’s population was a tragic consequence of WW2 (1939-1945). The Germans expelled and then brutally murdered Konin’s Jewish population in the middle of 1940.
The post-war industrialisation of the region was based on the discovery of brown coal deposits in this part of Wielkopolska. Coal extraction on a large-industrial scale got underway in 1950. This resulted in the building of the Konin and Pątnów electric power plants and the aluminium smelter which changed the face of the region from an agricultural one into one of the country’s major industrial centres.