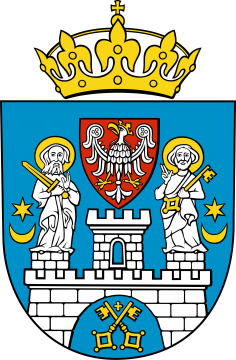 The voivodeship and regional capital, the city lies on the Warta river in central Wielkopolska. This is where the history of Poland began. This is the city of the Poznań International Trade Fairs and the stupendous music of the Henryk Wieniawski International Violin Competition and the Poznańskie Słowiki (Poznań Nightingales) Choir. It is one of the country’s leading centres of learning. This is a city where regional traditions and customs thrive. An important point on the Piast Trail.

History
The history of Poznań began in the 9th century when a grad was raised on Ostrów Tumski (one of the islands at the confluence of the Warta and Cybina rivers) to guard a river crossing. This is where Mieszko I brought his Bohemian bride Dobrawa, was baptised, and established Poland’s first bishopric.
The settlement withstood the onslaught of Bretislaus I, Duke of Bohemia, in 1038. Wielkopolska was so badly devastated that Duke Casimir I the Restorer moved the capital to Cracow. The later period of having its districts broken up proved to be beneficial to Poznań. In 1253, the brothers Przemysł I and Bolesław the Pious founded a new city on the left bank of the Warta and vested it with Magdeburg rights. The regular Old Town configuration we see today was created by laying down a square marketplace with 12 radial streets. Przemysł II had the Royal Castle in Poznań erected in an attempt to unify all Polish territory.
The reign of Władysław Jagiełło opened a happier chapter in the history of the city. Merchants and craftsmen flocked here and Bp. Jan Lubrański established Poland’s first humanistic school of higher learning on Ostrów Tumski. Krzysztof Hegendorf was among those who lectured there. The eminent royal physician, Józef Struś (the first to write about heartbeat), lived here.

The 16th and 17th centuries also saw the rise of the reformation. This was fostered by the Górka family, Wielkopolska’s most powerful. Bp. Adam Konarski brought the Jesuits here as a counter measure in 1572. They soon opened a college of their own. Fr. Jakub Wujek, the first to translate the Bible into Polish, served as its first rector.
This prosperous expansion came to a halt with the outbreak of the Thirty Years’ War in 1618, followed by the Swedish deluge” (1655-60), the Great Northern War, and an epidemic of plague. The depopulation of the countryside forced the city authorities to bring in Catholic settlers from the Bamberg area. These people, the ancestors of the Bambrzy ethnic group, came in stages beginning in 1719.
The next phase of development in Poznań came with King Stanisław August’s Commission of Good Order. The development of arts and crafts and the reconstruction of public buildings followed. This period came to a close in 1793 with the Second Partition of Poland and incorporation into Prussia.