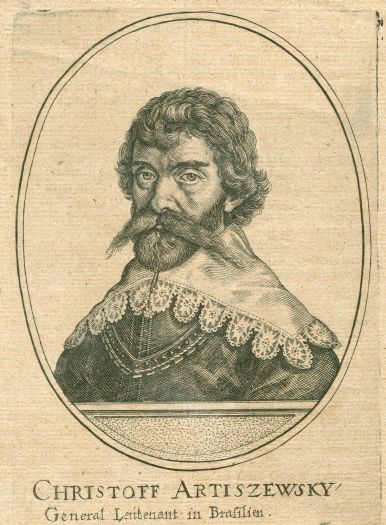 Arciszewski was a General of the Artillery, a poet and writer. Born 1592 in Rogalin (Poznań county), he was educated in an Arian school at Śmigel and Frankfurt-on-the-Oder. Sentenced to exile on account of a murder committed near Kościan, he fled to the Netherlands in 1623.

Once there, he studies military engineering and served in the army. In 1630 to 1639, he joined the Dutch West-India Company to fight in Brazil against the Spaniards, gaining the rank of General of the Artillery and Admiral of the Naval Forces through his service.

Resulting from his wrangles with political authorities, he resigned and retuned to the Netherlands. As he was offered an option to serve in the Polish army in 1646, he decided to return home.

In that period, he converted to Calvinism. During the Khmelnytsky Uprising, he joined the armed forces at Piławce/Pilyava (1648) and ran the defence of Lvov. He remained a dissenter till his death. He authored a medical treaty Epistola de pedagra..., along with some now-lost memories and publications on artillery.

His output includes lyrical verse, some poems having been co-authored with his brother Eliasz. Krzysztof Arciszewski died 1656 in the village of Buszkowy near Gdansk and was buried at the Bohemian Brethren church in Leszno.