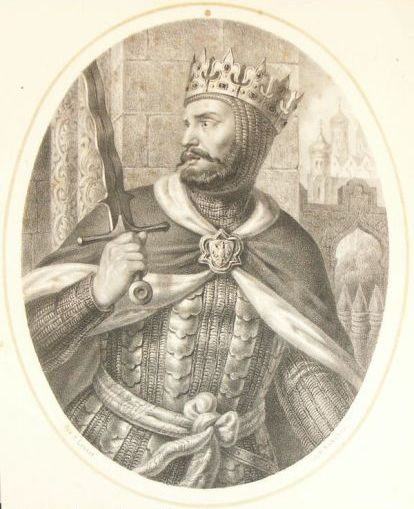 BOLESLAUS I THE BRAVE [BOLESŁAW CHROBRY]

Born in 967, Bolesław was the first King of Poland, son of Mieszko I and Dobrawa. After his father’s death in 992, he came to power by expelling his stepbrothers and eventually unifying the country.
He followed up his father’s efforts through collaborating with the Empire and strove in Rome for establishing a Polish ecclesial province. In 997, Boleslaw offered shelter to Adalbert (Vojt?ch), Bishop of Prague, and it was on his initiative that Adalbert undertook a Christianisation mission among the Prussians. Adalbert was eventually killed by the latter and Bolesław bought out his corpse from them; soon after, the martyr’s canonisation accelerated the establishment in 999 of an independent church province with its seat in Gniezno. In the following year, 1000, Bolesław received the visit of Emperor Otto III in Gniezno, at which ‘Gniezno Convention’ new bishoprics were set up: in Krakow, Wroclaw, and Kołobrzeg. The collaboration with the German party was discontinued after Otto’s death in 1002. The seizure of Lusatia and Milsko (i.e. Upper Lusatia) by Bolesław, and his interventions in Bohemian affairs (seizure of Prague) ended up by 1002 in a new war waged against Henry II, the new emperor, which, though interrupted, did not end until 1018. The war was concluded with Bolesław’s victory, as confirmed by the peace treaty of Budziszyn/Bautzen.
In 1025, a few months before he was to die, Bolesław crowned himself in Gniezno as King of Poland. He eventually died in 1025 and was buried at the Poznań cathedral.