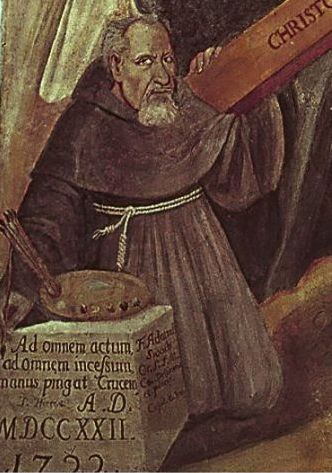 Franciscan and painter. He was born in 1668 in Daszyce in the Czech Republic. In 1686, he joined the Franciscan Order in Poznań, of which his brother Anthony had already been a member. Since Swach showed artistic talent, in the following year he was sent to study in Lviv under the supervision of the king's court painter, Jerzy Eleuter Szymonowicz-Siemiginowski. Swach returned to Poznań around 1690 and he began to work in the field of decorative and easel painting. Already in the first two decades of the 18th century he was a well-known and respected painter.

He created a number of precious polychromes in the churches of Wielkopolska, often competing with foreign artists. His first popular work was a polychrome in the Franciscan Church in Poznań (1702). His other works include the polychrome in the Franciscan monastery complex in Pyzdry (1712 and 1735), in the chapel of the Lipski family in the collegiate church in Łowicz (1718), in the church in Krasnystaw (1723), in the Capuchin monastery in Jarosław (1726), in the wooden church in Wełno (approx. 1729), in the Cistercian church in Owińska (1730), in the Cistercian abbey in Ląd (1730, a small dome) and in the Church of the Most Precious Blood of Jesus in Poznań (1735). He was also the author of a number of paintings, including the ones made for the abbey in Ląd and for the Franciscan Church in Poznań. He died in 1747 in Poznań.