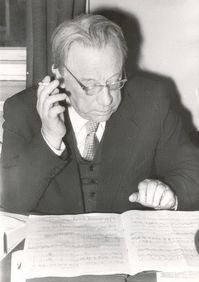 A lawyer and composer. Born in 1896 in Lviv where he also started a musical studies and then continued them in Cracow,  at the same time studying law (he eventually got a  doctorate at Jagiellonian University).

From 1923 he was running his own law firm in Vilnius although in 1929 he went to Paris to study a composition. After his return worked as an organist, lecturer and composer in both Poznań and Vilnius.  When the Second World War ended he lived first in Lublin, then, in 1947, he moved to Poznań and became a director The State Higher School Of Music (he also lectured there and in Warsaw) and Poznań Philharmonic.

He was the initiator of the festival of contemporary music, called the "Poznań Musical Spring".