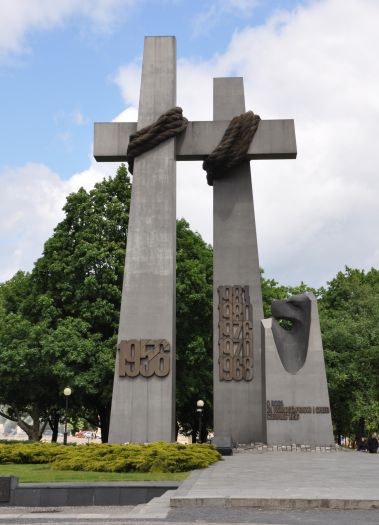 The city lies on the Warta river. It is the capital of Wielkopolska Voivodeship and the see of the Archdiocese of Poznań. It is an important point on the Piast Trail.

In place of the Prussian fortifications dismantled in 1904, the German architect and town planner Joseph Stübben created Dzielnica Cesarska (Imperial District) as a place where Germans (especially civil servants) staying here could feel at home.

The former Dom Ewangelicki (Evangelical House), a throwback to the northern renaissance designed by Johannes of Charlottenburg, stands on ul. Święty Marcin (St. Martin St.). This became the head office of the Ignacy Jan Paderewski Academy of Music after WWII. A new wing, designed to fit in with the existing building, was added in 1997. The building has an information screen indicating the level of atmospheric pollution.

The Adam Mickiewicz University Faculty of Law is across the street in the former Reiffeisen Bank building. This adjoins the former Royal Academy (i.e. college), designed by Edward Fürstenau in the German Northern Renaissance style. The building now houses the Chancellor’s Office and, owing to its superb acoustics, Assembly Hall, of Adam Mickiewicz University. Several world-famous music events are held here, including the Henryk Wieniawski International Violin Competition and the Poznań Musical Spring.

The German Theatre, built by Max Littmann in 1910, stands in front of the Assembly Hall. This is now the office of the Stanisław Moniuszko Great Theatre, one of Poland’s foremost operatic stages. Feliks Nowowiejski’s The Legend of the Baltic and Krzysztof Penderecki’s The Black Mask were given their world premieres here.

The Collegium Maius stands on ul. Fredry (Fredro St.). This was originally the Head Office of the Prussian Settlement Commission, a body whose task it was to purchase land from Poles and transfer it to Germans. During WWII, it served as the head office of the Presidium of the German Police. The Grey Ranks raised the red and white flag on the cupola in 1940. It is now the head office of the Poznań University of Medical Sciences.

The castle built for German Emperor Wilhelm II between 1905 and 1910 (according to a design by Franz Schwechten) dominates the entire district. This is now the Castle Cultural Centre. A fete is held in the square in front of the castle on 11 November every year to celebrate St. Martin’s name day.

In the midst of all this lies Adam Mickiewicz Sq., the site of the June 1956 workers’ protests. A commemorative monument in the shape of “striding” crosses, designed by Adam Graczyk, was unveiled on the 25th anniversary of the 1956 Poznań Protests (known as “Poznań July” in Poland). The first monument to stand here - a statue of Chancellor Otto von Bismarck - was destroyed during the Wielkopolska Uprising. A plaque of the foot of the crosses commemorates the statue of Christ the King erected here for votive offerings after independence (pulled down by the Germans in 1939). The Adam Mickiewicz monument erected here in 1955 was therefore the third.
Adam Mickiewicz Square is also the place where Poznań residents got to meet Pope John Paul II in 1997.