Church of the Assumption of the Blessed Virgin Mary in Kościan 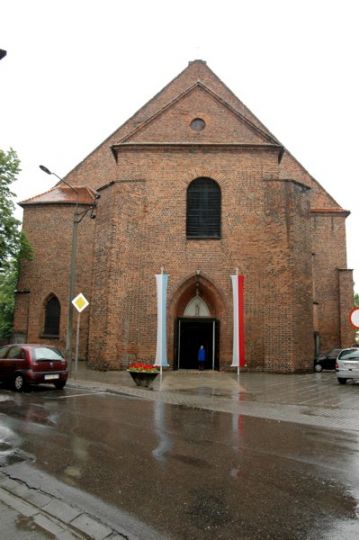 The county seat is located approx. 60 km south-west of Poznań, on the road to Leszno.

Work on building the church commenced in the first half of the 14th century. The body of the nave was erected first and the then single-nave presbytery a little later. The chapel near the aisles went up in the 15th and early 16th centuries. The presbytery was probably built around this time as well. The temple was thoroughly restored between 1892 and 1896.

The interior is covered with late Gothic network, star and rib-groin vaults from the beginning of the 16th century and the furnishing is valuable. A late-Gothic triptych from c. 1525 can be found in the late-renaissance high altar from 1620, which also a wealth of carved decorations. The church additionally has 11 side altars, mostly renaissance and baroque. The late-Gothic triptych (1507) by the rood screen is an older relic and is attributed to the Silesian workshop of the Altar Master of Gościszowice. The late-renaissance tombstone from the end of the 16th century is noteworthy, as is the late-Gothic sculpture from the early 16th century in the rood screen.