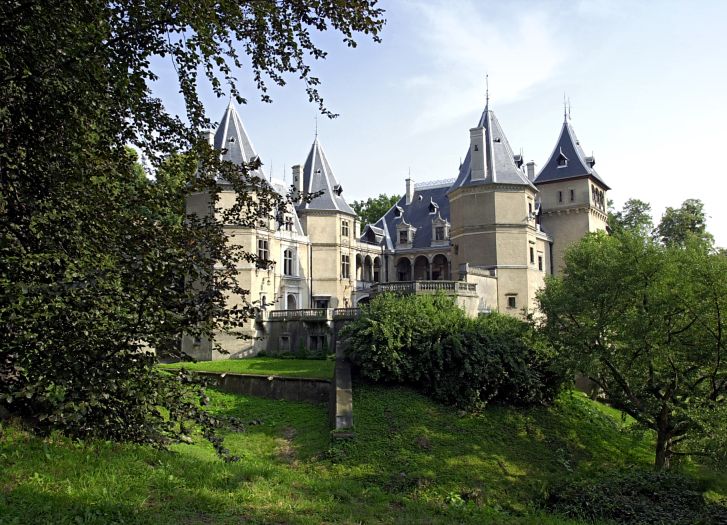 The Działyńskis lived in Paris and could only return in 1869. Jan Działyński also inherited Kórnik and both residences required a great deal of expense. After a lot of discussion, in 1871, Izabela purchased the estate from her husband to make a comfortable home for her sumptuous Paris collections.

The previous plans for a general restoration of the castle were implemented. Work was also carried out on the gardens and other buildings essential to the proper functioning of the future residence. Its area was expanded considerably. Lodgings for the owners were set up in the grounds of the future park (whose southern end had a chapel and a distillery) while renovation was in progress between 1872 and 1875.

The plans to restore the castle were worked out in Poland in line with a concept devised in Paris by the leading French architect and conservator Eugène Viollet-le-Duc. Both Działyńskis acted as advisors and had the final say. Work began on the castle in 1876 and continued for 10 years. Polish and French tradesmen and French artists and conservators were employed.

Izabela Działyńska was aware that she was saving the ancient family seat of the Leszczyńskis. Every article from those times was meticulously restored. Valuable bas reliefs and mosaics purchased abroad were placed next to authentic items from the castle. The renovated interiors were filled with valuable tapestries, paintings and furniture to create a unique and inimitable whole.

The expansive park was laid out while the castle was being renovated and almost took until Izabela’s death in 1899 to complete. The last was the mausoleum, a converted 17th chapel completed just after she died.
Izabela had more than the splendour and comfort of her successors in mind. Saving this castle connected with the history of Poland and then setting up a museum and ensuring public accessibility by way of a lawful bequest was also intended to educate her compatriots – oppressed by the partitioning powers – through contact with art.

Działyńska’s nephews were the next owners of Gołuchów. The castle, with its Greek vases and Limousin enamel famous throughout Europe, was open to visitors. The owners’ most eminent guests only stayed in its chambers during important family occasions.

The last war spared the building and the park. Bountiful collections, some of them deposited in Warsaw, were taken to Austria and returned to the National Museum in Warsaw after the war. The rest, including the Greek vases, were stored in Poznań by the occupiers and then sent to the Soviet Union. These were returned to Poland – but not Gołuchów – in 1946 and 1956. Today, only some of the original furniture, a few paintings and 56 Greek vases (260) are stored in Gołuchów.

The castle has been part of the National Museum in Poznań since 1952. The expansive 150 ha park, together with the remaining buildings, was acquired by the State Forests National Forest Holding, which opened a Forest Culture Centre here in 1974. The entire complex is now open to the public.