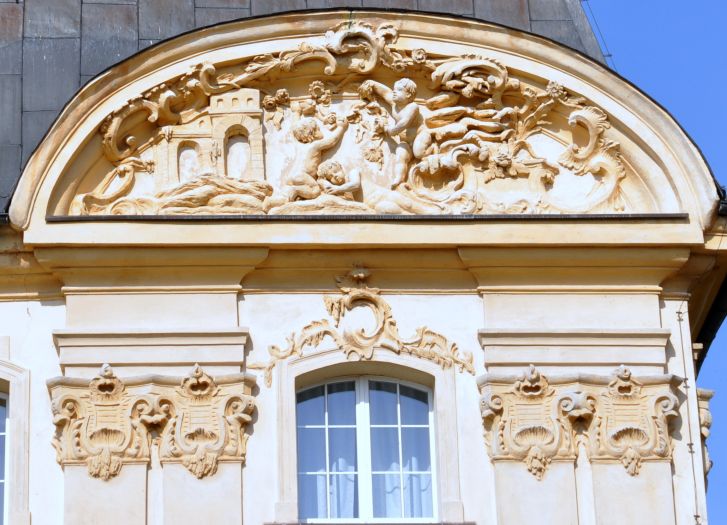 The village lies in Słupca County in the administrative district of Lądek nad Wartą, about 9 km south-west of Słupca.

The bishops of Poznań were granted property by Duke Przemysł. There are 14th-century records of a defensive bishops’ residence. The present palace was erected between 1760 and 1768, with the finishing touches being added at the turn of the 18th and 19th centuries. It was most likely designed by an architect from Warsaw’s Jakub Fontana circle, probably Józef Sacco.

The establishment was meant to consist of a complex of buildings behind two cours d’honneur. The palace on the high right bank of the Warta and a regular horticultural establishment exploiting the natural terrain, were all that was built. The palace is an impressive three-storey building with mansard roofs on a rectangular plan.
The front and rear elevations have been accentuated along an axis and the outermost parts have flat fake projections with pediments filled with sculptural decorations.

The interior has a two-bay room arrangement. The ground floor has a spacious vestibule in the middle of the front part and a salon in the rear row of rooms. The superb stuccoed walls and ceiling rims still survive in the two salons on the residential level. Rococo motifs and ornaments interlaced with scenic and architectural themes were used here.

Ciążeń was the summer residence of the Poznań bishops until 1818. Following the confiscation of church property, ownership passed to Count Wacław Gutakowski, a lieutenant in Napoleon’s chevau-légers who had married Józefa Grudzińska, the sister of Joanna, wife of Grand Duke Konstantin. The state assumed ownership in 1924. It now houses a branch of the University Library (with the largest Masonic collection in Europe) and the Artists Retreat of the Adam Mickiewicz University in Poznań, as well as guest rooms.