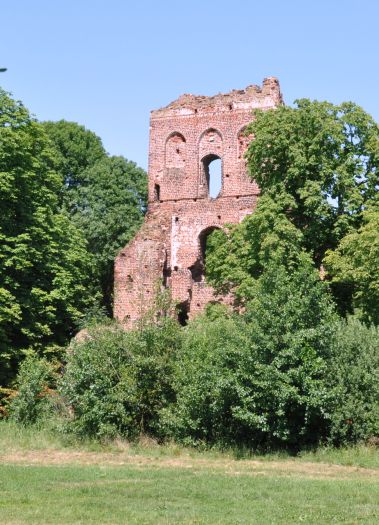 A village in Grzegorzew commune (gmina), district (powiat) of Koło, located ca. 12 km north-east of Koło, on a rivulet named Rgilówka, whose flood waters and bends were once part of the castle’s fortification system.

Surviving till this day just in scarce fragments, the Borysławice castle was erected in 1425 by Archbishop Wojciech Jastrzębiec. Situated on a small, probably artificially heaped up hill surrounded by a moat, it was built with bricks in a gothic layout, and founded on a rectangular projection, dimensions 21 m x 25 m, with two rectangular, one-tract, three-storied buildings situated along the rectangle’s shorter sides. It is plausible that earth fortifications were set at that time around the castle, as was, possibly, a wooden palisade.

The second stage of construction work, delivered in the latter half of 15th century, probably by Ścibor Jastrzębiec, the castle was surrounded by brick walls set ca. 7 metres off the edifice and embracing a rectangular area of the size of 38 m x 41 m. In the former gateway axis, erected is an extensive foregate connecting the castle with the external circumference of its ramparts which were probably topped with battlements.

The following phase of redevelopment had probably to do with changes in the fortification system and the necessity to make the structure fit use of firearms, then coming into use. The early 16th century saw erection at the thitherto existing foregate of a tall tower with three vaulted storeys and brick walls decorated with blind windows. It was preceded by a new foregate, reinforced at its corners by buttresses and protruding far ahead the walls’ curtain.

In the later period, even though some renovation work might have been carried out there, the castle was never rebuilt again and started falling into ruins. Relicts of the gate tower have survived, along with remnants of the foregate and the castle structure’s walls or ramparts.