Your clipboard (0)
Homepage | Catalogue of attractions | The Palace in Czempiń 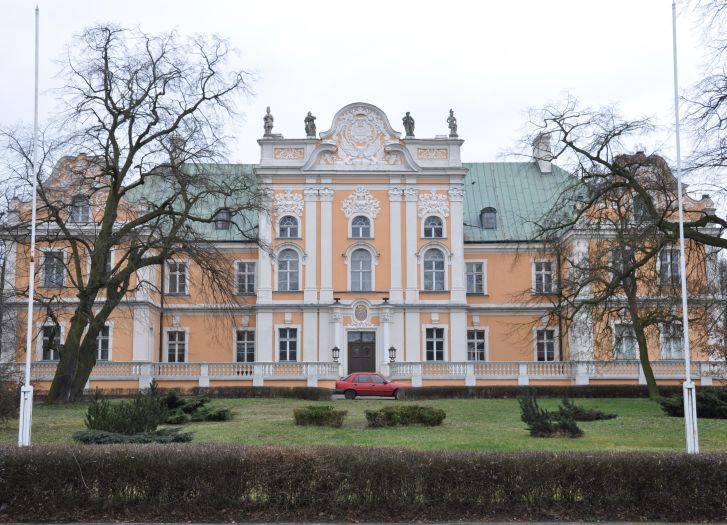 The palace of Czempiń (district [powiat] of Kościan, ca. 30 km south of Poznań) is one of the most splendid baroque residences in Wielkopolska.

It is believed that the edifice’s construction was completed by 1698, the year of the wedding of Ludwik Szołdrski and Marianna nee Unrug of Kargowa – the bridegroom being the only son of the period’s estate owner Andrzej Szołdrski.

A brick two-storied building erected at that time upon barrel-vaulted cellars was founded upon a rectangle projection with three prominent breaks at the front, with narrower and more pushed-forward side breaks and a somewhat shallower but wider central break. In the central section of the rear elevation, another break (also called projection) was provided. The whole solid was surmounted with tall roofs whilst the façades got adorned with pilasters set across their height.

Destroyed during the Great Northern War, the palace was rebuilt in the 1730s by the estate’s subsequent owner Ludwik Szołdrski, Voivode of Inowrocław and a Wielkopolska army general. As the date placed in the cartouche above the main entrance tells us, the work was completed in 1739. The solid’s form and the façades’ articulation were not altered then, but appended were the projection-crowning tops, ornamented with extremely rich and spectacular stuccowork and sculpting decoration displaying regency motifs. The copestone of the front façade’s central projection is the site of four sculpted allegoric figures referring to four continents.

The palace’s interior has also remained unchanged; yet, its surrounding environment has been transformed thoroughly. As part of the redevelopment, the yard-of-honour appearing ahead of the residence was contained along the sides within elongated annexe buildings connected with the palace through quarticircular galleries. Halfway through the length of the yard-banking development line introduced were two gate towers, situated opposite to each other, yet another one being located at the yard’s closing, within the front elevation’s and main palace entrance’s axis. The redevelopment author was probably Adam Stier of Bohemia, a recognised builder already by then.

The 1830s decade saw dismantling of the developments encircling the yard-of-honour (with the main gate as the only surviving item today). As we are told by the period’s accounts, the bricks from the demolished buildings were used in reconstruction of the nearby small town which had been destroyed by the fire. The former garden in the residence’s rear area was enlarged at the time and made a picturesque landscape arrangement.

The Czempiń estate was auctioned and sold in 1847 to the von Delhaes family who were to remain there into 20th century. The palace’s interior was thoroughly rebuilt then; a ceiling divided the grand room into two levels and moreover, partition walls were applied to divide its space into smaller rooms. In front of the palace, along most of front elevation’s length, a terrace with a balustered banister was set. In turn, by the garden elevation break, a circular-projection terrace was built, supported with columns, its banister being balustered and displaying coats-of-arms of the contemporary owners integrated into it.

At present, the palace is property of the PPHU Pałac Gębice company which organises trainings, business or integration events and the like events at the palace.