Your clipboard (0)
Homepage | Catalogue of attractions | The Palace in Czerniejewo 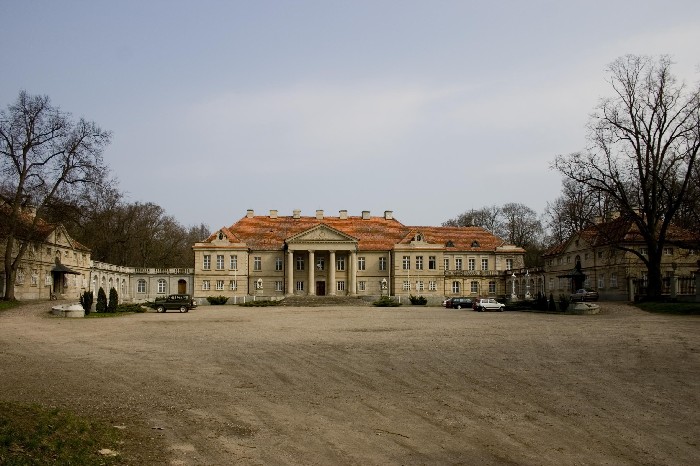 Czerniejewo, a town in the Gniezno district (powiat), is located ca. 40 km east of Poznań and ca. 15 km south-west of Gniezno. Czerniejewo is an important stop as you go along the Piast Route.

Situated in Czerniejewo (a communal town in the Gniezno district), the residence of the Lipski and then, the Skórzewski family, ranks among the most valuable classicist-style residences of Wielkopolska – all the more so that it has survived almost unchanged till our time.

It was on initiative of the then proprietor Jan Lipski that a new residence was erected in Czerniejewo, then inherited, as part of the entire property, by his son Józef, later on made an army general, married to Józefa nee Szołdrska of the coat-of-arms Łodzia. The Lipskis’ daughter Marianna, who married Rajmund Skórzewski of the coat-of-arms Drogosław in 1823, contributed it as a dowry estate to the Skórzewski family. It was at their time that works were carried out to reshape the garden whilst the palace was made home to a collection of sculptures, paintings and manuscripts as well as a library numbering some 20,000 volumes, including a number of old prints. The Skórzewskis held the estate till 1939.

The palace is a classicistic edifice – the form it was shaped to already during its construction, in the early 1770s, rather than resulting from a later-date redevelopment. It was erected as a brick plastered edifice founded upon a rectangular projection, with two side breaks and a magnificent portico in the front elevation facing south, plus a trilateral break in the central section of the rear elevation. The palace’s two-storey solid, its ground-floor storey being lower than the upper one, founded on vaulted cellars, has been topped with a tall hip roof.

The palace’s elevations are covered with plaster, rusticated on the basement and smooth on the upper floor where the rustication only highlighted the corners of all the parts of the building. The vertical divisions are set by the rhythm of rectangular window openings’ axes, the openings proving larger at the upper storey. At the side projections’ copestone, added are parapet-wall ledges, smoothly bent upward in the central section where a small elliptic window has been made. The front elevation’s axis features a monumental portico, supported upon four columns and four boundary half-columns and crowned with a triangular pediment, with the proprietors’ coats-of-arms placed in its field: the Grabie by Lipsk and the Poraj by Koźmiński.

The interiors’ layout is double-track, with an extensive vestibule containing the stairs leading to the representative floor level and a circular room situated along its axis, filling out the rear elevation’s projection space. The so-called sala terrena on the ground floor is a rather low-ceiling room, supported on eight columns and originally ornamented with polychromes, surviving to our time in a fragmentary form. On the upper level, this room, analogous as to its projection, is considerably taller – it was originally meant to serve as a ballroom. Its walls and a false copula were once decorated with polychromes. The presently existing paintings were made in a recent time; the older décor now consists of: paired pilasters, once patterned in a marble-like design, furnished with composite capitals reaching up to a profiled surmounting cornice; a decorative parquet floor, featuring an ‘umbrella’ motif surrounded with a vegetal writhe; and, a timber sculpted fronton decorated with floral garlands.

The palace’s side sections also display a two-tract interior layout, with a narrow inter-tract corridor on the ground floor and rooms arranged in a series on the upper storey. There, on the upper level, inside the eastern projection, the owners’ private apartments were located. Polychromes with landscape motifs, decorating the western projection’s grand room’s walls, discovered during the renovation/conservational works in the 1970s, were made at the end of 18th century. The remainder of the décor elements, preserved in the ground-floor and upper-floor rooms, date to the Skórzewskis’ time – i.e. 19th and 20th century.

Between 1926 and 1928, an eastern wing was added, according to the design by Juliusz Nagórski, as was the gallery linking the palace with the outhouse. The other gallery – designed but not constructed at the time – was eventually built following the Nagórski blueprints in the course of a renovation work carried out in 1978 to 1985.

A hotel is presently housed at the palace. On 3rd June 1997, it hosted seven presidents of Central-Eastern European countries who attended a solemn breakfast there, on the occasion of their participation in the ceremonies of the one-thousandth anniversary of the death of St. Adalbert.

Tourist groups can visit the palace by prior appointment.