Your clipboard (0)
Homepage | Catalogue of attractions | The Palace in Gułtowy 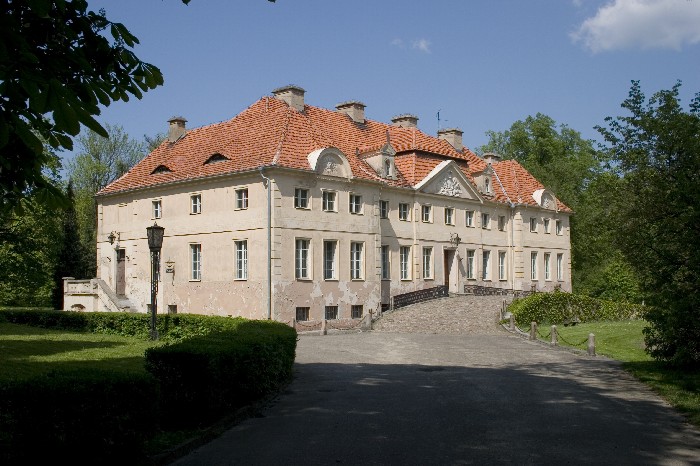 This locality is situated in the district (powiat) of Poznań, the commune of (gmina) of Kostrzyn, ca. 30 km south-east of Poznań.

In the Middle Ages, Gułtowy was the heirloom of the Grzymalitas; between the early 16th and the late 17th century – of the Leszczycs of Gułtowy.

The residence, built in 1779–1785, is on the border of two epochs style-wise: its prevalently baroque architecture has a tint of classicism to it. Moreover, it is not a thorough manor or palace; hence, it should be described as situated on the borderland of two types of residence.

The construction works were started in 1779 by Seweryn Bniński. A year later, Ignacy Graff, court architect to the Sułkowskis of Rydzyna, took the charge and it is him that the baroque residence’s final shape is owed to.

The palace is a two-storied edifice founded upon high-rise vaulted cellars, with a taller presentable ground-floor storey and a low-rise upper floor. The structure’s solid, rectangular as to projection and crowned with hip roofs, is shaped by triple-axial projections, protruding forward mostly in the building’s side sections, and the central projection, separated with only a slight wall downcast, yet emphasised as it is with the form of a front-end mansard roof above it and a triangular pediment. Featured within it is the Łodzia, the Bnińskis’ coat-of-arms, surrounded by panoplies.

The plastered elevations, displaying windows, rectangular on the ground floor and square on the upper floor, arranged axially in a regular manner, are ornamented with rustic on all the quoins. Coming in front of the front façade is a high underpinned driveway enabling access to the ground-floor level.

On the ground-floor level whose interior’s central part is arranged in a two-track fashion, with a vestibule and a salon on the axis, a two-storey ballroom has been designed within the westward projection. A set of luxury apartments for private owners is situated in the opposite eastward projection. Out of what was once rich furnishings and décor, only scarce remnants have survived, among which much of interest is the so-called marble parlour with its stucco wall lining whose dominant tone is grey.
An annexe built ca. 1780, also designed by Ignacy Graff, has survived within the park complex area.

A fire of 3rd September 2009 heavily destroyed the palace.

A conference centre of the ‘Adam Mickiewicz’ University is housed there today.