Your clipboard (0)
Homepage | Catalogue of attractions | The Palace in Jarogniewice 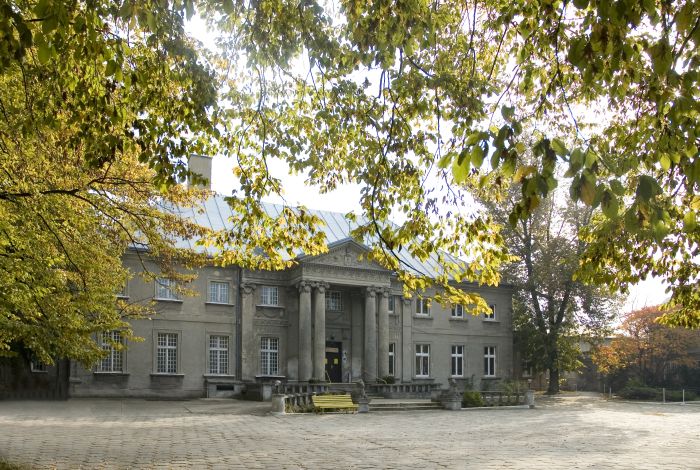 Jarogniewice is a village located in the commune (gmina) of Czempiń, Kościan district (powiat) ca. 38 km west of Poznań.

The name of Jarogniewice first appears in the records in 12th century. In 14th-15th centuries, the village was property of the Jarogniewskis of the coat-of-arms Szaszor. The village was bought in the early 17th c. by the Ciświckis who then resold it, in 1649, to Stefan Łoś Goliński. The property remained in the Goliński family’s hands till the close of 18th century.

The estate was subsequently inherited, in 1781, by Urszula Golińska who made it part of a dowry contributed to Celestyn Sokolnicki of the coat-of-arms Nowina, the High Steward [Polish, podstoli] of Poznań. It is with his name that construction of a magnificent residence is associated (the residence was redeveloped on a later date).

1866 saw the merged properties of Jarogniewice and Głuchowo be taken over by a certain Adam Żółtowski, a man with a thorough education background in agronomy and humanities, and married to Maria nee Kwilecka, of the coat-of-arms Szreniawa. Adam established a white beetroot plantation in Jarogniewice, which delivered the raw material to the sugar factory in Kościan; the other business he attended was horse breeding for the military. The palace and its surrounding area were redeveloped on Adam’s initiative and in his time.

The project encompassed a restyling of the interior’s spatial composition and of its décor. The concept and decoration of the elevations were also subject to metamorphose. However, the primary form of a classicist brick edifice with a dense two-storied solid upon vaulted cellars has remained as it was. A tall hip roof covered a structure that was founded on a rectangular projection, with a trilateral break within the rear elevation axis.

The palace’s elevations, supported against a pedestal and plastered, are unravelled with windows, mostly rectangular and much larger on the presentable ground floor than on the upper storey. The front façade, facing the west, a triple-axial central section has been separated with a slight wall downcast forming a sort of shallow false projection. Its surface is dismembered with four great-order Ionic pilasters, above which a frieze and cornice stripe is set along. The pseudo-projection’s central axis, containing the building’s main entrance, is preceded by an impressive portico with two pairs of columns topped with Ionic capitals, above which there is a frieze featuring an ample decoration, albeit of a later date of making. The whole entity is topped with a triangular pediment featuring the Ogończyk – the Żółtowski family’s coat-of-arms. The Ogończyk and the Szreniawa by Kwilecki – the former estate proprietors’ coats-of-arms – have also been set in the copestone of the rear elevation’s projection.

The interior – heavily reshaped nowadays – houses today only remnants of its former layout with a vestibule in the axis and a salon within the rear-elevation axis’s break as well as some fragments of the original decoration. Subject to thorough transformation toward the close of 19th century and on the verge of 20th c. was also the residence’s surrounding area, with galleries annexed at that time, combined with the annexes flanking the yard-of-honour in front of the palace.

It is to the time the residence was erected that a romanticist-style landscape-based park layout dates, as deployed on the turn of the nineteenth century – this making it one of the earliest such arrangements all over Wielkopolska (the park was slightly enlarged at a later date). This picturesque park set around the palace has partly preserved its composition, specimens of old tree growths and an artificial water channel linked to an oval pond featuring an artificial isle.