Your clipboard (0)
Homepage | Catalogue of attractions | The Primatial Cathedral Basilica of the Assumption of the Blessed Virgin Mary and St. Wojciech (Adalbert) in Gniezno

The Primatial Cathedral Basilica of the Assumption of the Blessed Virgin Mary and St. Wojciech (Adalbert) in Gniezno 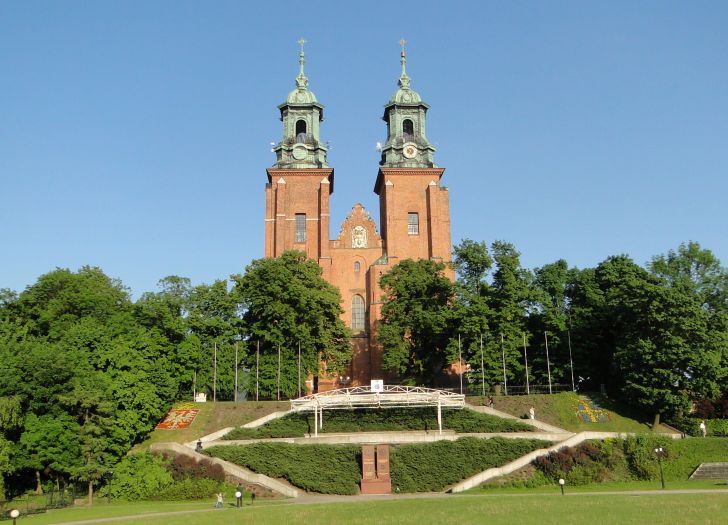 The county seat is about 50 km north-east of Poznań.

The Primatial Cathedral Basilica of the Assumption of the Blessed Virgin Mary is a monument to Polish culture in the highest sense of the term. Relics of pre-Romanesque temples from the 10th and 11th centuries are kept in the basement. These do not allow the shapes of the earliest buildings to be unequivocally determined.
A three-nave basilica was erected after 1018 and demolished by Bretislaus I, Duke of Bohemia, who took the relics of St. Wojciech from Gniezno. The Romanesque cathedral was rebuilt c. 1064. The beautiful ceramics and glazed floor tiles that have been excavated attest to its splendour.

The eminent archbishop, Jarosław Bogoria Skotnicki began to build a new Gothic cathedral in the 2nd half of the 14th century. This was not completed until the end of the 16th century. The roof and part of the interior was destroyed by fire in 1613 and 1760, which explains why the cathedral was rebuilt and redeveloped in various styles, including the baroque cupolas on the towers designed by Ephraim Schröger in 1779.
Another fire in 1945 destroyed the cupolas on the towers, the roofs, the matroneum, and part of the vault in the nave, although the Gothic aisles and chapels were left unscathed.

The building was rebuilt and “re-Gothicised” in 1945-1961. A lot of Gothic architectural and sculptural details and medieval polychrome fragments were uncovered during this time. The original Gothic vault in the presbytery and the nave was reconstructed and an archaeological examination was conducted.

The Cathedral has been a minor basilica since 1931. It is a three-nave Gothic building with an ambulatory encircled by a garland a chapels.

Two mighty towers ascend from the west. The figures of Polish saints and blessed people (M. Rożek, 1932–1936) appear on the walls of the chapels.

The main entrance, now a vestibule featuring the famous Gniezno Doors, is next to the south tower. The doors are one of the most important Romanesque artistic relics in Europe (for a paid tour, apply at the sacristy in the north aisle). They were made in the late 12th century (c. 1170 – a gift from Mieszko III) and consist of two bronze wings cast in lost-wax. The left is 328 cm x 84 cm and was cast whole, the right is 323 cm x 83 cm and was cast in 24 parts, and they are 1.5 to 2.5 cm thick. The lions-head-shaped door knockers were cast separately. The doors were most likely made in Poland and were influenced by Mosan Art. Scenes from the life of St. Wojciech are depicted on 18 panels, beginning on the lower panel of the left wing and finishing on the lower right. The wings are bordered with a rim decorated with plants, human and animal figures and work, hunting and fighting scenes. This valuable historical relic was renovated in 1997 and a new way of showing it was arranged that year.

The door frame is a beautiful late 14th-century Gothic portal made of artificial stone and uncovered in 1963. The richly moulded jambs are crowned with upheld heads and the cornice is decorated with figural and animal themes symbolising human virtues and vices. A tympanum with a depiction of the Last Judgement occupies the centre of the portal.