The Town Hall in Krotoszyn 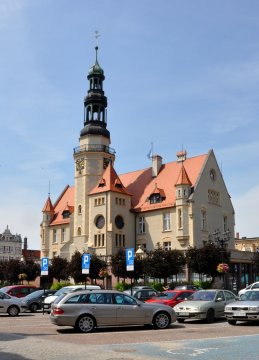 Krotoszyn is a county town located ca. 80 km south east of Poznań, at the crossroads of Jarocin–Wrocław and Ostrów-Wielkopolski–Rawicz routes.

The brick town hall of Krotoszyn was erected in 1689 owing to the endeavours of Franciszek-Zygmunt Gałecki, the then-owner of the town, and Lord Mayor Jan Dobrowolski. The edifice was burnt down in 1774 during a fire of the town. Its reconstruction, to baroque forms, was completed by 1777; it is to that time that the decorative cupola of the tower dates back. In the course of a redevelopment exercise of 1898/1899, one storey was added as a superstructure, the elevations being reshaped to a German pseudo-renaissance style.

Located centrally on the market square, the town hall is a three-storey building whose solid is fragmented. Above the southern elevation towers a quadrilateral – and, higher up, octagonal – tower with an observation deck. It is crowned by a baroque cupola with two lanterns, covered by a domed canopy. The tower contains a 1897 clock. Inside, a few 18th-century rooms have survived, including a hall with a cross vault supported against a single column.

The building is home to the Municipal and Communal Office and the Registry Office.