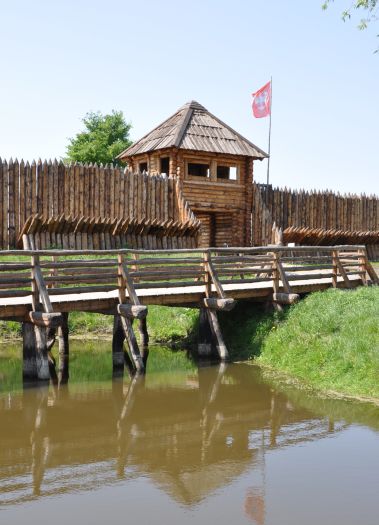 The county seat is situated on the Prosna, about 140 km south-east of Poznań.

The district of Zawodzie is known as the cradle of Kalisz and is situated approx. 2 km south of the city centre.
The proximity of the Prosna River was favourable to settlement. The first grad was raised in the 2nd half of the 9th century on the site of a pagan cemetery. The grodzisko (Slavic hill fort) achieved its greatest reach in the 10th century and was one of the most important centres of the Piast realm. The Kalisz centre player a leading role, according to Prof. A. Buko. Legend has it that St. Wojciech came here by boat to give a sermon. The first church in Zawodzie was erected in the 1st half of the 11th century.

The centre’s development is connected with the reign of Mieszko III the Old (c. 1122-1202), Duke of Kalisz and Wielkopolska. The stone St. Paul Collegiate Church was raised on its foundations and was meant to serve as a necropolis for the rulers of Kalisz. Even the duke and the son that predeceased him, Mieszko Mieszkowic, are buried here. A gilded wooden processional cross and a stone tombstone have been uncovered. The collegiate church reflected the rulers’ ambitions. The title “king” appears on coins minted by Jewish moneyers in Kalisz.

Zawodzie was enclosed by a craftsmen’s settlement with the Church of St. Wojciech and a market settlement on the site of today’s old-town marketplace.

The Duke of Silesia, Henryk Brodaty (Henry I the Bearded), destroyed the grad in 1233 and the city began to expand elsewhere. The plundered ducal grad fell into ruins and the collegiate church was stripped for building materials. The place was later named the “Swedish Mountains”.

The early medieval hill fort, which was opened on the Zawodzie Archaeological Reserve in 2008, comprises a full-scale reconstruction of the basement of the St. Paul Collegiate Church, a two-storey defensive tower, a wooden bridge, and fragments of palisades, a stockade and a defensive embankment. There are also seven wooden houses with a variety of structures, a stone kurgan (burial mound) reminiscent of a cemetery and crematorium, and two granite models of the entire reconstruction of the reserve and collegiate church. A late 18th-century wooden cottage, now used for ethnographic exhibitions, was brought to the hill fort from the old town.

The reserve is a branch of the Kalisz Regional Museum. Outdoor “medieval” events are staged here in summer.