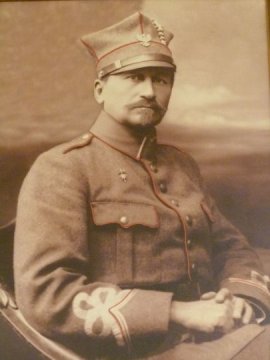 A general. Born in 1867 in Garbów near Sandomierz. He attended to a middle school in Radom. In 1883 he joined a cadet corps in Petersburg, later he studied at the Academy of General Staff. In 1914 promoted to a rank of colonel as a chief of the headquaters division. Fought on the austrian front.

In 1917 promoted to a lieutenant  general , at the end of this year he became a commander of the First Polish Corps in Russia (30 000 soldiers). Under a dominance of the enemy the corps were  demobilized.  In 1918 he moved to Staszów. On the 6th of January 1919 he was summoned to take over the  command of divisions in the Greater Poland Uprising from the National People Counsel. Oficially, he accepted the order on the 16th of January.

In the short period of time he organized  a military of over 70 000 soldiers. He intended to spread the area of the Uprising and encompass Gdańsk.  In March 1919 he got a nomination to a  rank of  lieutenant general  and at the end of 1920 he demitted and settled in Lusowo near Poznań. Died there and was buried on the local cementary.