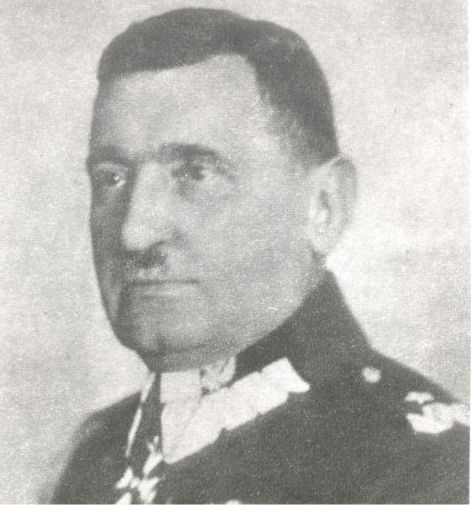 A general. Born in 1974 in Mieszków  near Jarocin. After finishing a middle school in Ostrów Wielkopolski  in 1897, he got a degree of an ironworker engineer at the Mining Academy in Freiberg (now University of Mining and Technology). He worked as an engineer in Westphalia and acted in polish organisations  in Germany.

His military service he started in a prussian army where in 1915 he became a captain. During the First World War he abandonded the prussian army  and started to organize the polish general  staff. On 27 th of December 1918 he got a major rank and a nomination for a Supreme Commander of the Greater Poland Uprising.

He created the command headquarters along with 9 military districts. After he transferred the power to general Józef Dowbor-Muśnicki, he was a quatermaster in the headquaters of the General District, then a deputy chief of staff. In 1920 he worked in the War Department in Warsaw.

Wiith a rank of lieutenant colonel and then a colonel he leaded the 69th regiment of infantry, between 1920-34 a brigade of infantry and the 17th division of infantry.  Pormoted in 1923 to a rank of a brigade general. 5 years later he became a commander of the second corps (the lubelski corps).
In 1930 he resigned and acted in Poznań in the Union of Veterans of National Uprisings and was also the leader of the Research of the Greater Poland Uprising history Society.

In September 1939 he fought in the Poznań Army and was taken a prisoner and moved to different oflags - Prenzlau, Colditz, Johannisbrunn, Murnau. After releasing in 1945 he was accepted in the Polish Armed Forces on the West but he return to the country only a year later. Died in 1960 in Malbork and buried there.  In 1988 his ashes were transferred to the Cementary of  Deserved People of Greater Poland.