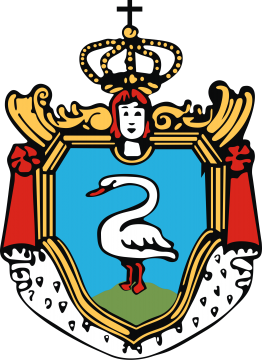 A county town situated on the Niesób river (colloquially referred to as Samica), on the Wieruszów Upland, Kępno is the southernmost town of Wielkopolskie Province – it is 170 km away of Poznań and 63 km of Kalisz. It is in Kępno that the chess champion Edward Lasker (1885–1981) was born; having emigrated to the U.S. and assumed the country’s citizenship, he several times won an Open Championship of the U.S.

Kępno’s name stems from the hillock (Polish, kępa) where a mediaeval ducal burg-city was to emerge. The earliest known source document concerning Campno is dated February 1282 and was a typical ‘survival arrangement’: Duke Przemysł (Premislaus) II (1257–1296) – later to be King of Poland – and Duke Mszczuj (Mściwoj) II (d. 1294), ruler of the Gdansk Pomerania. Their political alliance was targeted at the fear against external threat from the Brandenburgians, which consequently forced the allies to cede their respective provinces in the event they could die without progeny. Kępno has been mentioned as a town since 1283.
As centuries went on, the hub was losing its significance, along with the municipal rights. The town was relocated, under the Magdeburg law, in 1661. It was in 17th century that a considerable group of Protestant refugees from Silesia arrived in Kępno. The resulting conglomerate of three nations: Polish, German and Jewish has led to religious disagreements.
Following 2nd Partition of Poland, 1793, Kępno was made part of the Prussian domain. Between 1807 and 1815, it formed part of the Duchy of Warsaw, only to be back within the limits of the western invader, under the provisions of the Vienna Congress (1815). The warfare of Wielkopolska insurgents did not carry the lusted-for freedom; it was only the Versailles Treaty of 1919 that afforded these lands to the Polish party. Kępno was back within Poland on 20th January 1920. After the Nazi occupation, Kępno was liberated on 21st January 1945 by Soviet Army troops.
The war over, Kępno was a tacit eye-witness to the ‘bloody Kępno events of 19th October 1945’, as the power was being seized by communists. Today, the town is an industrial hub and a transport interchange.

There is a town hall (built 1846) standing in the middle of the marketplace. East of the market situated is a classicist synagogue from 1814–1815.
Among the objects worth seeing is, certainly, St. Martin’s church (1912), designed by the famous architect Roger Sławski (1871–1963). The church interior’s abundant outfit is worth your attention.
In Poniatowskiego Street, you will find another object of historical interest – the Evangelical church of Augsburg confession, consecrated on 8th October 1863, on the parish’s 250th anniversary.
Kępno’s storied-type railway station from 2nd half of 19th century is a unique historic object of this sort, along with the station in Kostrzyn-nad-Odrą.
In Kwiatowa St. is a ‘Tadeusz-Piotr Potworowski’ Kępno Land Museum offers a rich collection to archaeology, history and ethnography lovers.
In the town’s western section is a municipal park where a concealed conical castle-city (grodzisko). In this once mediaeval burg-city, the aforesaid dukes signed their donatio inter vivos (intravital donation).