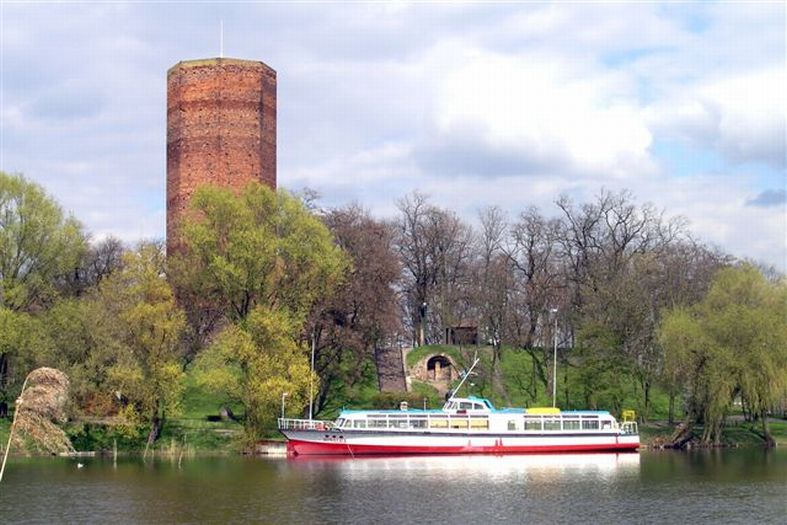 A town situated in the Kujawy-Pomerania Province, District (powiat) of Inowrocław, ca. 16 km south-east of Inowrocław. Kruszwica is an important point on the Piast Route.

The Former Castle of Kruszwica

South-east of the Market, the Mouse Tower dominates the Lake area landscape; situated at the base of Rzępowski Peninsula which cuts into Gopło Lake, it is a relict of the castle erected in mid-14th century by King Casimir the Great.

In 1656, the castle was seized by the Swedish army which burnt it down as they were retreating. In the late years of 18th century, the castle ruins were gradually dismantled and its bricks floated up the Noteć river to Inowrocław. Only one of the towers has survived – octagonal, 32 m in height – along with fragments of walls adjacent to it. During excavation works carried out in 2nd half of 20th century, a number of other fragments of the castle and movable objects of historic interest were discovered. In the northern part of the castle hill, relics of an early-mediaeval burg-city were found: wooden huts with clay threshing floors and hearths; clog-lined streets; numerous pieces of equipment; ornaments and implements (incl. e.g. glass beads, amber products, clay vessels, bronze and iron products).

The Mouse Tower is the main tourist attraction of Kruszwica. You can climb up to its top using the wooden stairs, to see a wide view from there, encompassing the town and the Nagdoplański Millennium Park. At the tower’s foot is a haven for ‘Rusałka’ promenade ship. A festival ‘At Piast’s and Popiel’s Place’ is held in mid-July, offering historical shows, demonstrations of crafts of yore, fighting scenes, plebeian amusements and Viking boat cruises.

The building located east of the Tower (also having a tower) houses an exhibition showing the castle of yore and the output of archaeological works.