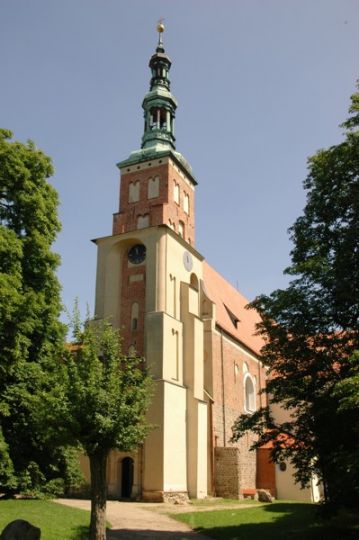 Benedictine monks were brought to Lublin around 1070, probably by Duke Bolesław II the Bold/Generous [Śmiały/Szczodry], from the Leodium abbey (today, Liège in Belgium). A monumental three-nave temple, 50 m long and 34 m wide, started being built then. The project was discontinued for reasons not known to us today; remaining of it are stone foundations and fragments of the walls. Half a century later, a smaller-sized, single-nave church and a convent building adjacent thereto were erected and built of stone. A tomb chapel was annexed to the presbytery’s northern wall in the early 13th century. Tradition has it that Duke Władysław III Spindleshanks [Laskonogi] was buried there. A redevelopment carried out in the former half of 15th century made the presbytery gothic; the tomb chapel adjacent to it was reshaped as well. The nave and the tower were rebuilt into a gothic style around 1530. It was then that the convent building was extended too. A thorough renovation of the tower, which included imposition of a new cupola, was carried out in 1643-1646. Cracks appearing in the tower walls implied its renovation repeated several times afterwards. In 1834, the Prussian authorities dissolved the convent, and its rich library collection was carried away to Berlin. A major part of the convent building was demolished in 1847. The Benedictines returned to Lublin only in 1923.

An autonomous priory today, the convent belongs to the Benedictine Congregation of the Annunciation.

The Nativity of Our Lady church is a single-nave building whose layout is based upon a cross plan, with a rectangular presbytery and two chapels (St. Benedict’s chapel in the north and Our-Lady-of-the-Rosary chapel in the south), forming the transept. The transept’s central section is covered by a dome-shaped vault, the spaces forming the cross’s arms being covered by sail vaults. The walls and vaults feature a baroque figural polychrome dating to 1st half of 18th century. A rich stucco decoration was made in that same period. The baroque and rococo interior furnishings are extremely rich. A small chapel of Lord Jesus, adjacent to the presbytery, has a baroque tombstone of Bernard of Wąbrzeźno, Servant of God, inside it.

The convent building is adjacent to the church on the north side. In its yard, surrounded with a late-eighteenth-century wall, you can see the largest chestnut tree growing in Wielkopolska region.

The convent was listed as a historic monument in January 2010.