Church of the Most Precious Blood of Jesus in Poznań 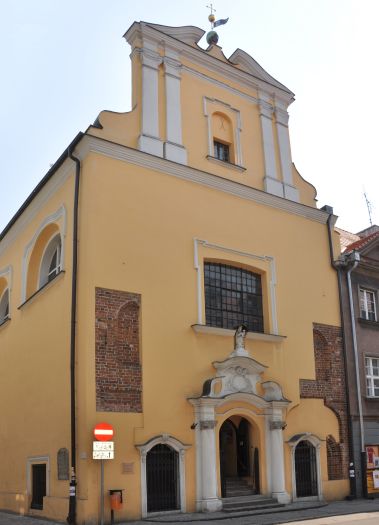 A small Church of the Most Precious Blood of Jesus is so well integrated with the surrounding tenement houses that very few people know about its existence.

In the middle of the 16th century there was the revival of the cult of the miraculous Host from the Corpus Christi Church. During this period, a number of writings were produced that added colour to the original version of the tale. Then the three Hosts started to be mentioned, which referred to the Holy Trinity.

The author of one of the writings, Tomasz Rerus, pointed out the tenement house that belonged to Świdwa-Szamotulski family at the today's Żydowska Street as the place of desecration. Therefore, the Carmelites decided to buy that house, as they wanted to make a chapel there. These plans could be accomplished no sooner than several dozen years later. During their endeavours to buy the house, in 1620 some bricked up planks with mysterious stains were discovered in the basement; the stains were believed to had been the traces of blood of the battered Hosts. An additional argument confirming the authenticity of the desecration site was the discovery of a buried well during the renovation works. Ultimately, only a seat of Carmelite friars for two monks was created there, which functioned until the dissolution of the Order in 1821.

On the vault a detailed the story of the three Hosts may be admired, presented in paintings by a Franciscan friar, Adam Swach. After the renovation only fragments of original paintings were preserved.

Again, the well with a decorative crane located in the vault alludes to the events that took place centuries ago. The water from this well to this day is considered to be miraculous and especially helpful in eye diseases. In order to see the well, visitors need to ask the local priest for access to the vault.

As if in defiance of the tale of the three Hosts, local Carmelites lived in great harmony with their Jewish neighbours. Jews, as the perpetrators of the desecration, appear as late as in the 15th century version of the tale written by Jan Długosz, and his story is very similar to the stories that appeared at that time in Europe with relation to anti-Jewish disturbance. These sentiments also intensified at the time the Carmelites took their efforts to construct a new church. Yet for many years the monks used to live together in harmony with the neighbouring Jewish community, doing various favours to each other.