Church of Nativity of Our Lady – ‘Na Pólku’ in Bralin 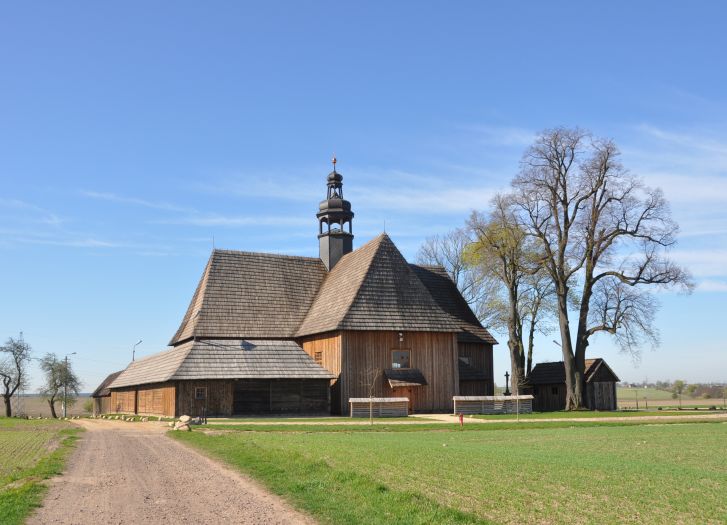 Bralin is a communal village located in Kępno district (powiat), ca.7 km west of Kępno. The church is situated amidst the fields, ca. 1.5 km south of the village.

Built in 1711, the church has undergone several renovations – recently, in 1978–1987 and 2001/2002. In 1993, Europa Nostra organisation granted the parish with a gold medal of honour in recognition of a successful restoration work.

The church is orientated, has a framework structure and is planked. Erected upon the Greek cross layout, its arms get narrowed externally. A sacristry is situated between the northern and the western arm. The roofs are shingles-covered. At the arms’ crossing point, visible is an octolateral ave-bell turret with two lanterns, topped with a bulbous spire. Inside, in the central part, is a false barrel vault; the cross’s arms contain timbered ceilings. The western arm has a gallery mounted on pillars, clinging to the arm’s walls. The walls’ and the ceiling’s polychrome dates to around 1800–1825 and followed the model of copperplates of the Venetian Missal of 1638.

The central section contains a standalone baroque main altar from ca. 1700–1725. On the walls are twelve late-baroque paintings of the Passion from the late 18th century. A classical pulpit dates to the early 19th c.

The church’s eastern part is surrounded with standalone one-storied arcades (so-called soboty), with chapels at the quoins.