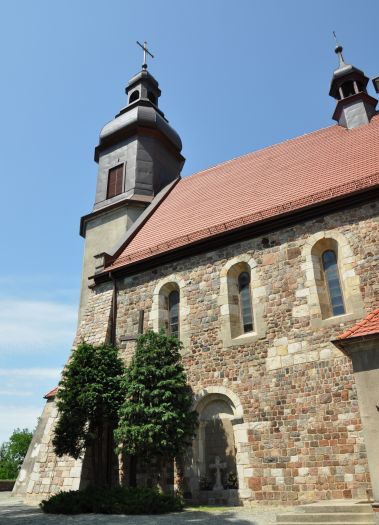 Kotłów is a locality situated ca. 30 km south of Kalisz.

The Romanesque church of the Nativity of Our Lady in Kotłów is one of Poland’s earliest temples. According to the chronicler Jan Długosz, it was funded in 1108 by Piotr Włostowic, also called Dunin, as one of the seventy churches he was supposed to erect as repentance imposed upon him for having raped Ruthenian duke Volodar and espoused princess Maria, who initially had been to marry Duke Bolesław III the Wry-mouth [Krzywousty].

The temple was orientated, one-nave, with a short presbytery ended with a semicircular apse. It was built of stone blocks joined with lime mortar. The walls, 1 m thick, were circa 9 metres tall. The church was preserved in its original shape till 1634, the date a wooden vestry was added on the south. A stone tower was built in 1721. Another redevelopment took place in 1905-8, with the apse and organ loft being demolished, a transept and, to the east, a new stone apse added – a reference to the original building. In 1923¸ the tower was elevated and three bells, the oldest one dating to 1557, fixed within it.

To date, Romanesque architectural elements have survived inside the temple. The Romanesque church’s eastern wall features remnants of former side altars with ciboria (a stone canopy), a unique solution applied in a Polish church. Stone crosses are surviving on both sides of the altars – so-called ‘Zacchaeus spots’, i.e. places at which the temple was consecrated. To the right in the main nave, a stone embedded in the wall and featuring a bas-relief of a marching lion; a local legend has it that it shows a pagan idol, worshiped in the past on the Kotłów hill. Excavation works led in 2009 to discovery of the foundations and walls of the original apse; also, remnants of a 12th-century Romanesque crypt were found.

The church’s outfit is much later-dated, baroque-style. The eighteenth-century main altar houses a painting of Our Lady of Kotłów, painted 1605 by Adam Scholtz, featuring Mary surrounded by angels and adored by St. Adalbert and St. Stanislaus. This icon has for ages been enjoying special worship among the believers, as most recently expressed through its coronation of 2009. It is veiled by an eighteenth-century portrait of St. Nicholas.

The temple’s vault displays a plafond featuring scenes from the life of Our Lady. Also, the eighteenth-century baptismal font, shaped into a basked of plenty, is noteworthy.

There is a cemetery by the church, where the parish villages each held, till 19th century, its own section where the dead from each respective village were buried. Anna Wiesiołowska, nee Skarbek, godmother to Frederic Chopin, was one of those buried at this cemetery.

Once the parson died in 1968, the parish witnessed a schism: some parishioners expected the local vicar to take over his deceased predecessor’s duties, yet this proved not to be in line with the ecclesial authorities’ decision. This incited the vicar to leave and join the Polish Catholic church, with a considerable number of his parishioners following him. A new, Polish Catholic, temple was to appear in Kotłów’s landscape. The split between the parish dwellers has remained quite clearly recognisable to date.