Church of Our Lady Assumed into Heaven in Śrem 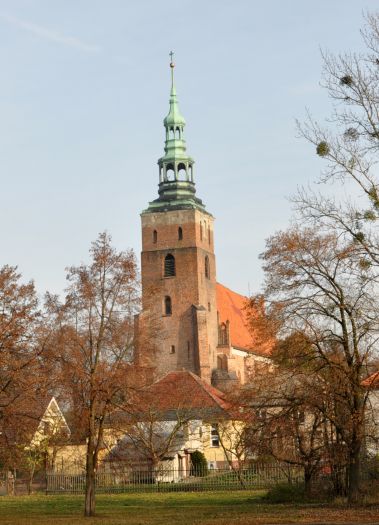 A county town situated at the bend of the Warta river, in the Śrem Dale, ca. 45 km south of Poznań.

The church was built in 15th century. In the following century, appended to its nave at the west was a tower with a porch on the basement; at the north, a late-gothic chapel was added. The edifice is one-nave, with a rectangular presbytery whose size is that of the nave. Both spaces are covered by starry vaults from the late 15th/early 16th century. The side altar contains a late-renaissance painting with a scene of Our Lady Adored by St. Adalbert and St. Stanislaus, dated ca. 1620. A renaissance tombstone of the Śrem deputy-starost Jerzy Jączyński, made in the late 16th c., featuring a bas-relieved armoured figure of the buried man, has been relocated into the porch.