Elevation of the Holy Cross Church in Koło 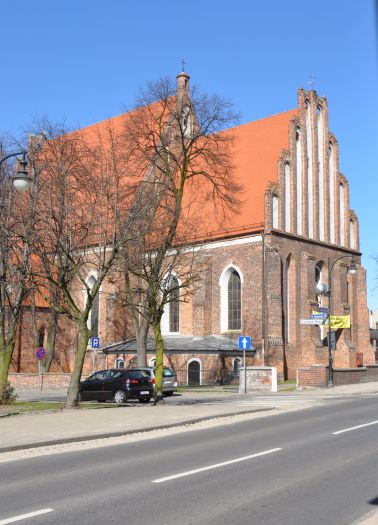 The county seat is on the Warta, about 120 km east of Poznań, on the way to Warsaw.

The parish church was erected at the turn of the 14th and 15th centuries. It is a three-nave hall building whose presbytery, which adjoins the sacristy from the south, is lower but wider than the nave. The 16th-century Chapel of Perpetual Help is near the south nave. The neo-Gothic Black Madonna of Częstochowa Chapel was added to the northern nave c. 1863 and the vestibule on the western wall of the nave body has been maintained in the same style.

Older monuments include the late-Gothic stone gravestone of Jan of Garbów (d. 1454), son of the famous Black Knight, and the late-renaissance sandstone sacramentary from the mid-16th century.