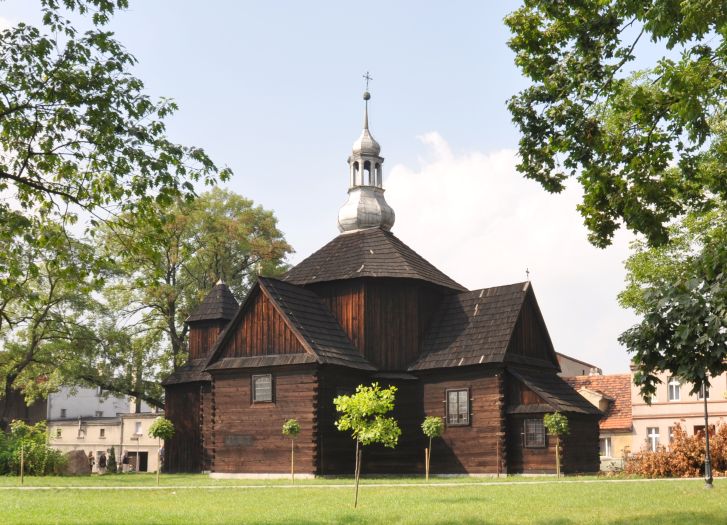 Krotoszyn is a county town situated in the south of Wielkopolska Province, ca. 45 km west of Kalisz.

The church is of log construction and in its upper central section, frame construction. Orientated, it is founded on a Greek-cross plan, with an octagonal middle section. A sacristry is set on the cross’s eastern arm’s extension; on the western is a columnar-construction tower, with a basement porch. The roofs are shingles-covered; the tower is covered by a tent roof. The dome’s top has an ave-bell turret with a lantern and a bulbous cupola. Inside within the arms are flat ceilings with facets; the central section is covered by a false octopartite copula.

The late-baroque main altar from the latter half of 18th century features a 175h-century baroque rood-screen crucifix as well as paintings of St.St. Fabian and Sebastian from 17th c. and of Our Lady with the Infant made in 18th c. In front of the altar mensa are statues of St.St. Roch and Florian from the late 18th c. There is also an inscription plate of Stanisław Staśkiewicz, a 1863 Insurrection veteran who died in 1900.