Your clipboard (0)
Homepage | Catalog of attractions | St. Michael the Archangel’s Church in Uzarzewo 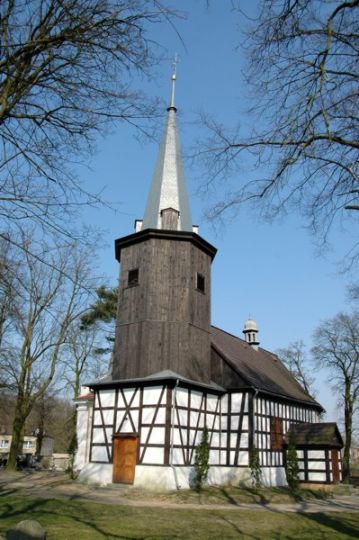 A village in Swarzędz Commune, Uzarzewo is situated on the northern escarpment of the Cybina river, ca. 15 km east of Poznań, by the Piast Route. Traces of appearance of humans from the Mesolithic age and remnants of Neolithic settlements have been discovered there. The village’s uninterrupted history goes back deeply into the pagan times.

The local parish’s history started in as early as 12th century; a wooden church was built owing to the royal foundation. The existing wattle-and-daub parish church of St. Michael the Archangel was built on the site of an earlier wooden temple which was dismantled in 1749. A wooden neo-gothic tower was added in 1869.

The church is a single-nave hall-type edifice furnished with a barrel vault. There are two side baroque-style altars, made in mid-18th century and dedicated, respectively, to the Heart of Our Lord Jesus and St. Teresa of Avila. The main altar of the Golgotha is set against the background of a wall-painted decoration in the form of a red draperied curtain.
Among the furnishings, your attention will be attracted by a seventeenth-century crucifix, an early-mediaeval stone stoup which functioned as a baptismal font till 1895, and in particular, the icon of Our Lady with the Infant, painted in 2nd half of 17th century and founded by Anna Młynarka of Uzarzewo, who is portrayed kneeling at the painting’s corner.
At the northern side, a sacristry and a neo-baroque chapel with a grave crypt of the Żychlińskis, the then-owners of the village, were appended in 1900.

During a renovation of the tower and its cupola, a sealed bottle was found within a copper ball supporting the cross, along with a corroded box containing six coins as well as various nineteenth-century newspapers and periodicals.

There are other objects of interest in the village: the Żychliński palace built in mid-19th century, now home to a museum (branch of the Szreniawa-based National Museum of Agriculture; a romanticist-styled rector’s manor house; early-mediaeval cone-shaped castle-city (grodzisko); monument trees; and, a natural curiosity called ‘Jar pod Uzarzewem’ (‘The Uzarzewo Ravine’).