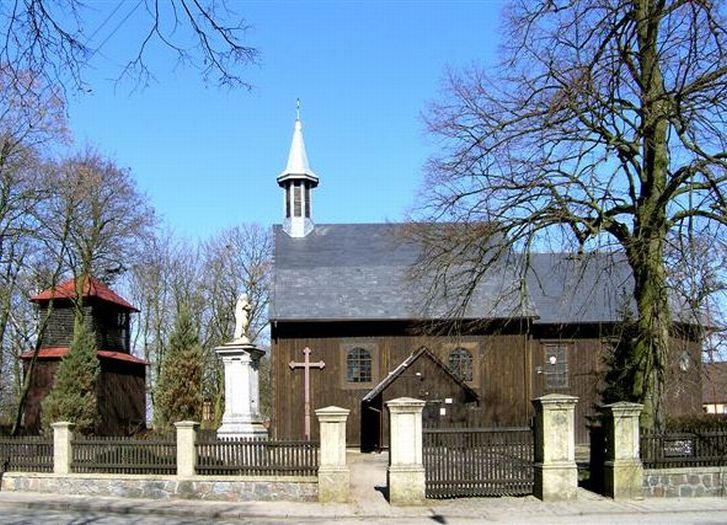 Gąsawa is a small locality in the historic land of Pałuki, Kujawy-Pomerania Province, located ca. 10 km south of Żnin.

Gąsawa was first mentioned in the records in 1136. It was actually a town for more than 500 years (1388–1934). 1227 saw a convention of Piast dukes held there; the event was brutally aborted by an incursion of Swantopolk (Świętopełk) II, Duke of Pomerania, with the resulting killing of Duke Leszek Biały (Leszek the White of Krakow). It was there that the Lubrański Academy was removed to in 1600, as a plague was decimating Poznań then.

The edifice which in our time attracts tourists hiking along the Piast Route is a wooden St. Nicholas’s church.

We are first acknowledged of a Gąsawa parish by a record dating to 1357; the said church was built in 1st half of 17th century. This single-nave orientated edifice has a log construction which is combined with a frame construction in an interesting way – a result of a renovation project carried out in the late 17th/early 18th c. when the temple was threatened by collapse. An extra frame structure was then erected around the log wall system, which has discharged the latter from the roof’s load. It is quite a unique intricacy, virtually not to be met in any other architectural solution Europe-wide. A frame-structured porch was added in 18th c. and the Zdebińskis’ grave chapel was appended in 1817.

How come the polychrome remained covered by a plaster layer for 150 years?

In the middle of 19th century, Gąsawa was under the Prussian rule. The local Poles were not granted consent from the Prussian authorities for construction of a new church; hence, it was resolved that the existing temple was to be renovated. It was during that renovation that the polychromed walls were covered with a thick layer of plaster that concealed the church’s unique interior for 150 years. This operation probably protected the murals against destruction when a cereals storehouse was arranged in the church’s interior during WW2.

The polychromes tightly fill the temple’s interior. They display scenes of the life of St. Nicholas and St. Augustine, and primarily, illustrate the Church’s learning in a manner accessible to illiterate people. Although the painter remains unknown, it must have been an excellent artist, judging by the perfect technique he has applied.

Not less valuable than the polychrome is the church’s outfit. A sixteenth-century Crucifixion group mounted on the rood beam comes from the earlier temple. A mannerist baptismal font, removed from Dominican Friars’ church in Żnin, is worth our attention too. A miraculous icon of Our Lady of Consolation is set within the main altar; it is to this painting that the Gąsawa church has owed its name as a sanctuary.

A wooden belfry built in the late 18th/early 19th c. stands in the area adjacent to the church.