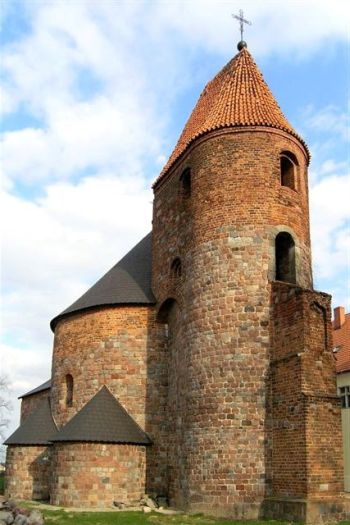 Strzelno is a town located in Kujawy-Pomerania Province, District (powiat) of Mogilno, ca. 18 km south of Inowrocław. It forms an important point on the Piast Route.

The origins of Strzelno churches have earned several hypotheses backing them. In spite of a considerable number of chronicle records, the dates of the temples’ construction have not been unambiguously determined. St. Prokopius’s church, erected in the latter half of 12th century, seems to the older one (it features a rotund with a turret and a square-shaped presbytery). The entire building, whose architectonic composition is beautiful, is made of carefully treated granite cubes cut out of erratic boulders. Only the upper part of the tower was made in 15th century with bricks. The nave is vaulted with a dome with girths; the presbytery being furnished with a cross vault. The history of this small temple is quite rich. Originally, it was a parish church, possibly consecrated in 1133. The existing rotund was dedicated to the Holy Cross until 18th c. In the following century, it fell into a ruin; restored much later in 19th century as well as in 1920s, it was destroyed in 1945 and subsequently restored in 1950s. The temple’s interior is rather rough. Opposite the entrance is an empty Romanesque grave, possibly of the cloister founder. The presbytery contains a stone altar mensa. On the wall are four 18th-century Stations of the Cross, saved from a former cemetery. Above one of them is a copy of the foundation tympanum which was destroyed in 1945, showing Christ on the throne. On the turret’s upper storey is a gallery with a two-arched window, so-called biforium, with a tiny Romanesque column.