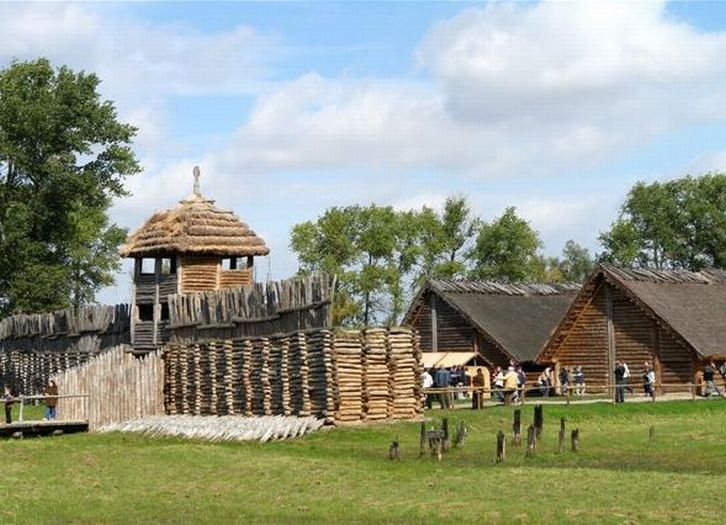 This small village in Pałuki in Kuyavian-Pomeranian Voivodeship is situated 9 km from Żnin. It is an important point on the Piast Trail.

In 1933, Walenty Szwajcer, a Biskupin teacher, noticed wooden stakes on a peninsula in Lake Biskupin. He managed to rouse the interest of Prof. Józef Kostrzewski. Excavation began in 1934 and the discovery of the Biskpukin settlement was hailed as the Polish Pompei. The fame and importance of the diggings attracted local and foreign dignitaries. The site was flooded during WWII. Work resumed in 1946. The site has been an archaeological reserve since 1950 and was placed on the National Heritage List in 1994.

The Biskupin settlement dates back to the Lusatian Culture period around 2,700 years ago. It was built on an island, covered 2 ha and was home to some 1,000 people. It was surrounded by a 460m embankment made of blocks. This was 6m high and coated with clay. About 4,000 trees were cut down to build a 3-8m thick wooden breakwater to protect against waves and ice. Entry was via a massive gateway with an observation post.

There were 13 rows of connected houses inside the village. Each had about 80 sq. m. of floor space and consisted of a hall and a foyer. Livestock provided warmth during winter. The hall had a fireplace whose smoke was let out through a hole in the roof. An entire family of 7-10 people would sleep in a single communal bed. The huts had no windows. The sameness of the furnishings attests to the heterogeneous structure of the society.
The interiors of three reconstructed huts are now on display, together with the implements the inhabitants used. In addition to the reconstruction, there is a museum exhibition entitled Świt historii nad Jeziorem Biskupińskim (The Dawn of History on Lake Biskupin) and a 19th century Pałuki farmstead.

The Archaeology Festival held here in September is the largest event of its kind in Poland.
Several historical films have been shot on location at the Biskupin archaeological reserve as well.