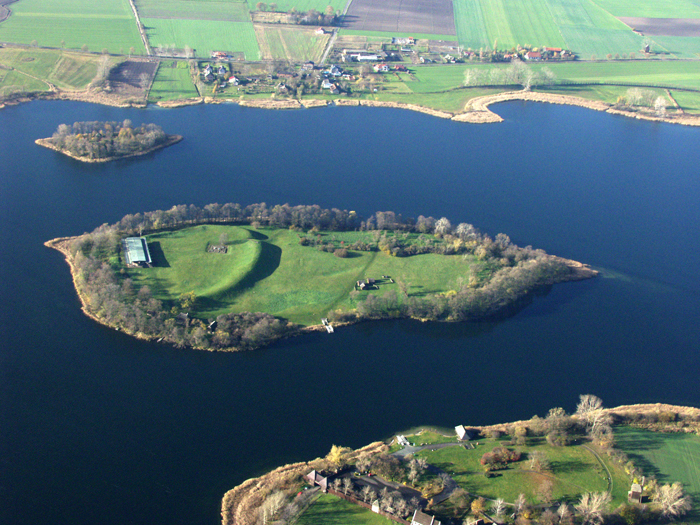 This early medieval archaeological site, 36 km from Poznań and about 18 km from Gniezno, is an important point on the Piast Trail.

The island is accessible by ferry from 15 April to 30 October during exhibition opening hours.

The 7.5 ha island is on the southern part of Lake Lednica where the path from Poznań to Gniezno used to run. It was one of the major centres of the realm of Mieszko I and Boleslaus the Brave, i.e. from the 2nd half of the 10th century to 1025. These days it is an archaeological reserve comprising the Museum of the First Piasts in Lednica.

The ruins on Ostrów Lednicki have inspired myths and legends through the ages about an unknown king who lay down at the bottom of the lake with his entire company of knights and about Boleslaus the Bold, son of Mieszko I and Dobrawa, being born in the grad on the island. The area around the island provides the setting for part of Józef Ignacy Kraszewski’s novel Stara baśń (An Ancient Tale).

The island has been inhabited since the late stone age. A grad enclosed by a 50-metre diameter embankment was built on the southern part at the end of the 9th century. A formidable defensive complex was built in the latter half of the 10th century.

The island is dominated by wooden and earthen embankments occupying approx. 1.5 ha (100 m x 120 m). There is a walled ducal palatinate with a baptistery and a church inside. The settlements beyond the walls spread northward. Wooden above-ground huts and half-dugouts were built on the grad and in the adjoining settlements. Two 5-metre-wide bridges connected the island to the mainland. The western one was 470 m long and led to Poznań, while the 174-metre eastern one led to Gniezno. Wooden fortifications along the shore have been discovered in the west.
Boleslaus the Brave probably received Holy Roman Emperor Otto III, who had arrived in Gniezno on foot for the Congress of Gniezno, on Ostrów Lednicki. The grad and bridges suffered damage in the 1030s. Archaeologists have come across numerous traces of battles (e.g. military equipment and helmets) while exploring under water. Relics of bridges and sunken boats have also been uncovered. The palatinate was partly rebuilt, and a tower made of granite blocks added, in the middle of the 11th century. The island remained inhabited until the 14th century but the significance of the grad decreased after moving the capital to Cracow. Ostrów Lednicki was then mainly used as a cemetery.