Your clipboard (0)
Homepage | Catalog of attractions | The Palace in Lubostroń 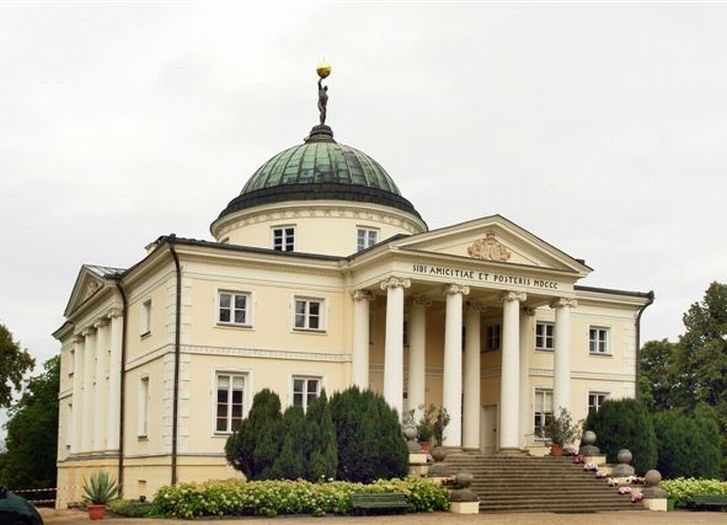 Lubostroń is a village situated in Kujawy-Pomerania Province, District (powiat) of Żnin, ca. 15 km north-east of Żnin. It is a stop on the Piast Route.

This valuable palace of historic interest was built between 1795 and 1800 after a design by Stanisław Zawadzki. It is the architect’s best preserved works, and certainly one of his best ones. His model to follow was Andrea Palladio’s Villa Capra. The building’s centre is a round hall set all along its height and covered by a dome. On the copper-sheet-metal-covered dome is a figure of Atlas carrying the globe (a work by Władysław Marcinkowski). The central hall – the rotund – has a beautiful parquet made of varicoloured timber, adorned with the national emblems of Poland and Lithuania in the centre. There are four bas-reliefs on the walls, featuring scenes from the history of Kujawy land. In the hall’s centre is a huge brass chandelier. To the left of the rotund hall are a few smaller rooms, surviving in a perfect condition: small barrel-vault-covered studies and a small corner study covered by a tiny cupola with lunettes, with paintings featuring symbols of sciences. The palace frescoes were painted by the outstanding painters Franciszek and Antoni Smuglewicz.

The palace was the site of a holiday house till 1977. Since 1996, following a thorough renovation, the palace has been serving as a display of stylish interiors, housing a tourist hotel. Its representative rooms are the scene for concerts, shows and spectacles. Next to the palace is a classicist annexe, so-called old palace, and there are court buildings in the neighbourhood. The palace is surrounded by a beautiful 37ha park whose layout is regular and turns further up into wilder and wilder forest sections. There are interesting specimens of trees growing in the park area. North of the park and palace is a complex of eclectic farm developments from the latter half of 19th century.