Your clipboard (0)
Homepage | Catalog of attractions | The Palace in Racot 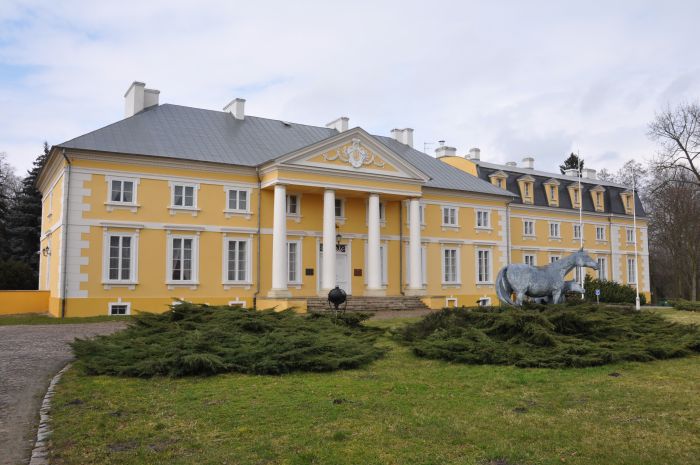 The history of this village dates back to the Middle Ages; its first owner, between 1390 and 1408 was Jan Borek. Later on, Racot belonged to his offspring, the Gryżyński family. In 1494, the village was bought by Marcin Gołutowski and it remained with his family till 1628 – the date Krzysztof Bronisz purchased the estate.

Since 1680, the property was managed by Piotr Bronisz, secretary to an envoy mission sent in 1700 by Augustus II the Strong to Istanbul and, toward the end of his days (he died in 1719), Castellan of Kalisz. Racot was inherited by his only daughter Dorota Radomicka – by her first marriage, duchess Jabłonowska by her second. She returned to Racot before mid-18th century and embarked on upgrading the residence. Before she died in 1773, she commenced construction of a temple, erected stables and annexes. Her son Antoni, duke Jabłonowski, Voivode of Poznań, took the property over. Holder of extensive domains in Volhynia and one of the most sumptuous residences in Warsaw, inherited from his father, he established a comfortable magnate abode.

The palace’s design was attributed to the royal architect Dominik Merlini, but it might possibly have been authored by Jan-Chrystian Kamsetzer.

A simple solid of this two-storey palace (the basement, taller than the upper floor, was meant to be presentable) was covered by a hip roof. The main section of the façade is highlighted by a portico whose Tuscanian columns bear a tympanum which is decorated with the Jabłonowski ducal family’s coat-of-arms.

The interior, on both storeys, is divided into a residential apartment being a suite of rooms, a vestibule and a salon behind it, and a dining room which together with its adjacent rooms forms a space devised for having meals and receiving guests.

Special attention is deserved by the interior décor, introduced toward the end of 18th century – in particular, the stuccowork decoration (surviving in the salon and its adjacent sleeping room) as well as the stuccowork ornamenting the ceilings of upper-storey floors (albeit spoiled by major defects). It displays certain associations with the stuccowork at the Pawłowice palace, a work by Italian artist Giuseppe Broghi. In turn, the well-preserved decoration in the ground-floor’s grand room is a replica of the eighteenth-century décor of this interior, made ca. 1900. Painting was applied along with stuccowork. The other items dating to the palace’s construction time include furnaces (scarce in number), fireplace casings, door carpentry and wreathed stairs you would use to climb the upper storey.

In 1799, Antoni, duke Jabłonowski sold the Racot estate to William, Duke of Orange who, once expelled from his country, intended to settle down in there. Proclaimed in 1815 king of the Kingdom of the Netherlands, newly established at the Congress of Vienna, he did not break up with Wielkopolska – as did his heirs William II and William III, the proprietors of Racot until 1884. The last owner, who held the property by 1918, was William III’s nephew Wilhelm Ernst Karl Alexander Friedrich, Grand Duke of Saxe-Weimar-Eisenach.

The late 19th/early 20th century saw an enlargement of the palace, with a two-storey wing being added on the west. The nineteenth century was the time when the garden set up at the palace’s rear side was expanded; impressive husbandry developments were built in 1881–1884. World War 1 over, the Racot property was taken over by the State Treasury. The land being part of the grange was transferred, together with the buildings, to a State-owned stud-farm established at that site, the palace being assigned as a residence of the President of the Republic of Poland. Provided in 1930 to the Province authorities, the palace’s management still remained responsibility of the stud-farm directors.