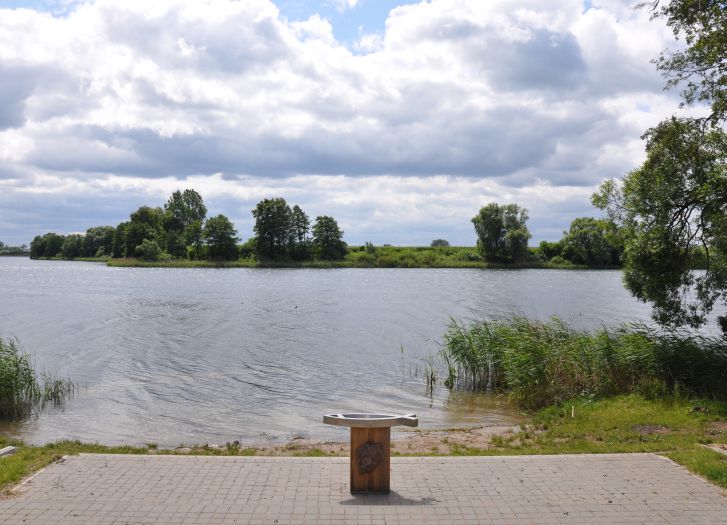 Pola Lednickie (The Lednica Fields) lie on the shores of Lake Lednica between Skrzetuszewo and Imiołki, about 20 km east of Gniezno, and are an important point on the Piast Trail.

Young people congregate annually in the 40 ha. of fields beside the road. Their focus is the Third Millennium Gate, a 36 m x 9 m openwork steel construction shaped like a fish – the symbol of Christ – and built in 1997. A processional road, with boulders on the sides serving as the Stations of the Cross, leads to the “Fish”. The openwork bell tower with the “Jesus Christ” bell, manufactured in 2000, stands near the gate.

Szkoła Wiary (Faith School) and a pastoral centre line the western part of the island. This houses a chapel, a meeting hall, a hostel, a back office to manage the organisational and technical aspects of the assemblies and, since 2006, the Pope John Paul II Museum. There are plans afoot to build a Temple of the Baptism of Poland as well. In April 2006, a huge boulder (approx. 25 tonnes) from Konin Coal Mine was placed in the centre as a monument to Pope John Paul II on the eve of the first anniversary of his death.

As many as 100,000 young people gather here from all over Poland. Attending mass and passing beneath the “Fish” is the highpoint of the hours of ceremonies. The first Lednica get-together was held on the eve of Pope John Paul II’s visit to Gniezno in 1997.
These gatherings are the brainchild of Fr. Jan Góra, an academic pastor from the Dominican monastery in Poznań. Every meeting is accompanied by a different spiritual message from the Bible.