The church of Holiest Heart of Our Lord Jesus in Turek 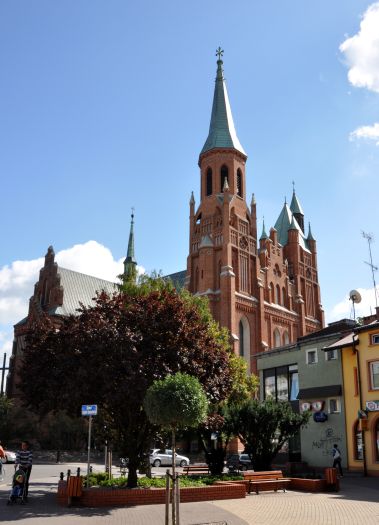 Turek is a county town located circa 28 km south-east of Konin, by the route to Łódź.

In the yearly years of the twentieth century, due to the building’s poor condition, the former gothic St. John the Baptist’s church was demolished. In lieu of it, a neo-gothic church of the Holiest Heart of Our Lord Jesus was erected. The construction went on between 1904 and 1913, after the design by Warsaw-based architects Konstanty and Jarosław Wojciechowski. Between 1932 and 1939, frescos and designs for stained-glass windows and furnishings were prepared according to the concept of Józef Mehoffer (1869-1946), the well-known Krakow artist, formerly a student of Jan Matejko. The outbreak of World War 2 prevented the project from being completed. Attempts undertaken to resume the plans once the war was over have partly failed. The 1970s saw the polychrome being restored for the first time. In 1982-5, the church’s roof was covered with a copper-tin roof, laid upon oak-tree planks. Since 2003, another maintenance/restoration project has been on; with use of preserved Mehoffer Bristol-paper sheets, stained-glass windows devised for the side naves are being created in Krakow.

The Holiest Heart of Our Lord Jesus is an orientated three-nave basilica with a transept. Two chapels are housed at the sides of its trilaterally-closed presbytery. Inside it, a cross-ribbed vaulting is applied, with starry vault appearing at the naves’ crossing and network vault, in the presbytery.

Soon after it was constructed in 1920s, most of the interior furnishing elements were provided – based for most part on Turek dwellers’ private funding.

A 14th-century stone stoup is placed at the northern porch, removed from its original site at the once-demolished St. John the Baptist’s church.