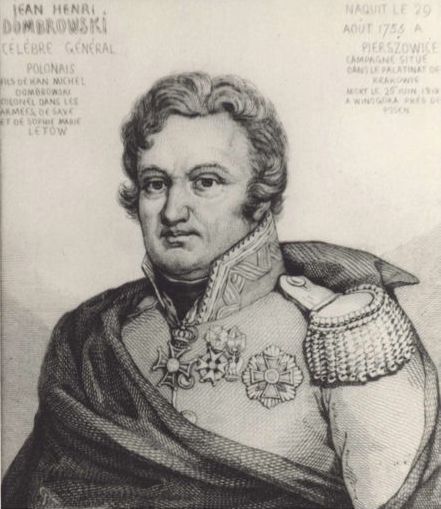 Dąbrowski was an army general who created the Polish Legions in Italy. He acted as a military commander in as many as three armed insurrections which took place in the area of Wielkopolska. Born 1755 at Pierzchowiec near Bochnia, he served from 1769 to 1792 in the Saxon army. He was back to his native country in 1792 to reform the Polish army’s cavalry. Heading the 1st Cavalry Brigade of Wielkopolska, he resisted in 1793 the encroaching Prussian imperialist army near Gniezno.

Having joined the Kościuszko Insurrection in spring 1794, he participated in the defence of Warsaw; then, in September, on command of Tadeusz Kościuszko, he headed a corps sent to Wielkopolska, winning the battles of Łabiszyn (29th Sept. 1794) and Bydgoszcz (2nd Oct. 1794). After the rising was subdued, he went away to France to endeavour there to form a Polish army. January 1797 saw him lead the Polish Legions which were getting formed then in Italy. In 1806, he was entrusted the organisation of an uprising against the Prussians in Wielkopolska.

In 1809, together with Józef Wybicki, he co-organised a third rising in Wielkopolska – this time, targeted at the Austrian army. He took part in the war against Russia in 1812; during the 1813 campaign, he partook a.o. in the Leipzig battle (16th–19th Oct. 1813). With time, he started retiring from political life, mostly staying in his property at Winna-Góra near Środa-Wielkopolska where he eventually died in 1818. General Dąbrowski was buried at the local church; since 1863, his remains have been removed to a side chapel’s sarcophagus.

The urn containing his heart was initially kept at the Winna-Góra palace, then, in Krakow and in the Poznań Town Hall; since 1997, it has been deposited at the Crypt of the Distinguished at the St. Adalbert’s church in Poznań.