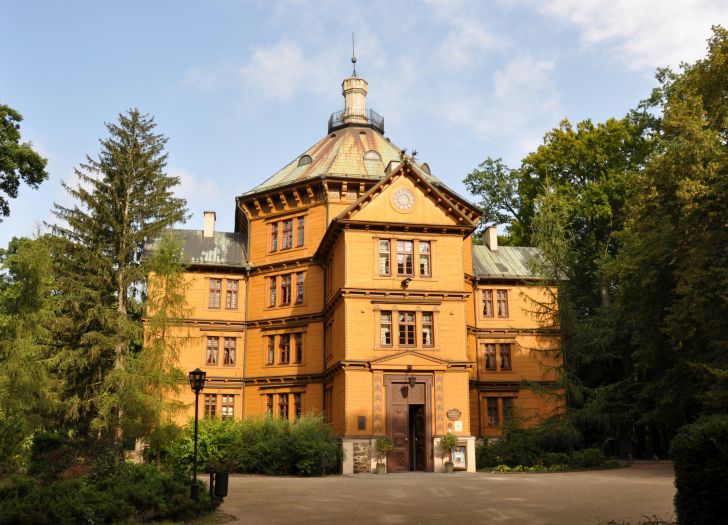 The village is in Ostrów County, about 16 km south of Ostrów Wielkopolski.

The property belonged to Prince Antoni Radziwiłł (1775-1833), who married Princess Louise of Prussia, a niece of King Frederick II (Frederick the Great). The prince served as governor of the Grand Duchy of Poznań and resided in the former Jesuit college in Poznań. He spent the spring and summer months of 1821-1826 building his hunting palace in the village of Szperek, which was renamed Antonin in his honour. This was the centre of an estate which had belonged to the Radziwiłł family since the 18th century.

The residence was designed by German architect Karl Friedrich Schinkel, who drew on 17th-century German hunting palaces for inspiration. This was the only avant-garde work he ever completed. The palace was erected on a Greek cross plan. The building is composed of modules that make use of geometric shapes. Three-level wings with pitched roofs are connected to the four-level octagonal central part (which has a tented roof) on four sides.
Inside, a massive octagonal chimney fulfils its structural role of supporting the polychrome ceiling. The residential apartments are in the wings and are connected via two-level galleries circling the foyer. The walls of the chimney stack display deer and moose heads (complete with antlers) as well as two chimneys.
The central interior reflects the democratic mindset of the duke. Twenty four guests could stay by the fireplace on equal terms. Everyone resided in the same standard of apartment, which consisted of an anteroom, a living room and a bedroom. Schinkel also designed folding beds for the servants.

Although considered wooden, the palace is actually timber framed. The walls are coated with peat for insulation and warmth while the outside walls are covered with pinewood beams. The socle is made of bog iron and the basement, which houses the kitchen, is made of brick.

Shinkel designed a Swiss style single-storey house, a forester’s lodge, a coach house, a dairy with a lounge room, and a “garden centre” (today the educational chamber of the Lasy Rychtalskie [Rychtal Forests] Forest Promotion Complex) at a respectable distance from the palace. Everything has survived, apart from the dairy.
The residential complex stands in forest clearings cut out to imitate natural glades. Pathways wind in amongst trees and shrubs, cross streams over wooden bridges and lead off into the forest. The islet in the small pond that lies between the palace and the road leading towards Ostrzeszów contains a symbolic tomb of two Radziwiłł children who died in infancy. One of them is modelled on the tomb of Scipio the Bearded in the Vatican. This is a very personal corner of the estate.
The commons were further on, not far from Lake Szperek. The school built here for local children is now a forester’s lodge. Family members were laid to rest in the nearby neo-Romanesque brick mausoleum, designed by Heinrich Häberlin and built 1835-1838. The building had always doubled as a chapel for the local population. The mausoleum was extended in the early 20th century. A triumphal arch, dating from the 9th or 8th century as a Byzantine work of art, was imported from Italy. The image of Our Lady of the Gate of Dawn in the round, stained glass presbytery window is meant to highlight the Radziwiłł family’s Lithuanian connection. The classicist entrance door is remarkable.
The last male heir in primogeniture had the caskets exhumed and interred beside the chapel in simple earthen graves with wooden crosses. The information plaques placed on them list the name of the person buried there along with that of his or her spouse.