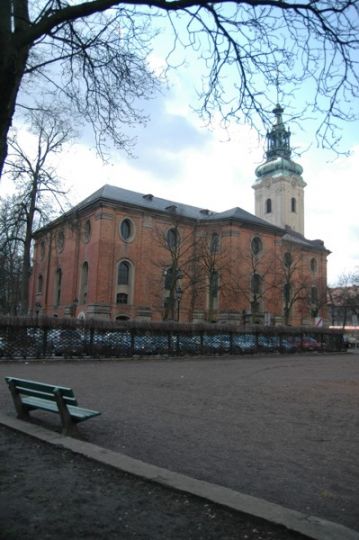 The county seat is about 80 km south of Poznań.

Leszno’s first Lutheran church was built on this site in 1635. It was burnt down in 1656 and again in 1707. Pompeo Ferrari designed the third Lutheran church and his close associate, Jan Adam Stier, saw to its construction. The church was completed in 1715, although its form was simpler than what had been designed. This was because it could not be more imposing than the nearby Catholic St. Nicholas Church during the Counterreformation. For all that, it is still the most beautiful Lutheran house of worship in Wielkopolska. The church was rebuilt in the early 19th century after the fire of 1790. The interior decor also dates from this time. In 1909, the tower was crowned with the cupola Karl Martin Frantz designed for it in 1743. The parish of St. Nicholas acquired the church in 1977. The badly damaged galleries (balconies) were removed during the comprehensive renovations. A Roman Catholic parish was set up in 1982.

The interior of the church presents a central arrangement typical of Pompeo Ferrari. The nave is marked out by eight pillars, of which the two easternmost constitute a frame for the high altar. Tuscan pilasters cling to the walls. The stucco high altar dates from 1804. The crucifix in the middle of it was made by Tomasz Michalik from Rawicz in 1986. The pulpit dates from the early 19th century. A plaque commemorating the outstanding preacher and poet Johann Heermann (1585–1647) sits next to it. Tombstones from the first half of the 18th century are kept behind the high altar and there is an ornamental ceramic floor from around the 19th century.

The lapidarium next to Holy Cross Church was created in 1950-1959. It has a unique collection of more than 100 sculpted sandstone tombs from the 1st half of the 17th to the 19th centuries, freestanding on the walls of the church and the walls around the church square. Most of them were brought here from Protestant (Unity of the Brethren, Calvinist and Lutheran) cemeteries closed after WWII. The oldest tomb, that of a blacksmith named Nitsch dating from 1625, can be found on the south-west corner of the wall of the church square.

The Leszno District Museum – in the former pastor’s house adjoining Holy Cross church – has a special collection of epitaph plaques and coffin portraits.