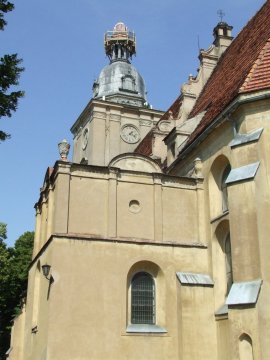 A town situated in the Krotoszyn district (powiat), 15 km north of Krotoszyn, by the road to Jarocin.

This one-nave temple was built in the 2nd half of 15th century by the town owner named Hińcza of Rogowo. The onset of 17th century saw adding to the presbytery of a square Chapel of the Przyjemskis. The church was entirely rebuilt to baroque style before 1671. It was then that the side naves and the turret were added and new vaults founded, on which a stucco decoration of the so-called Lublin-Kalisz type has survived till this day.

The church is amply furnished: the central area of the main altar, which dates to before 1635, is a late-gothic sixteenth-century bas-relief with the scene of the Dormition of Our Lady, a work of a Silesian atelier. Moreover, there are a total of seven baroque and rococo side altars from 17th/18th c., stalls and a pulpit (1680) and a renaissance sacramentary made of sandstone (1550). A late-renaissance tombstone of Andrzej Górka and his wife Barbara, dating to the former half of 16th c., displays the dead individuals’ figures kneeling by a crucifix. Among the earlier-date monuments are two gothic calyx-shaped lavers, made of granite in 15th century.