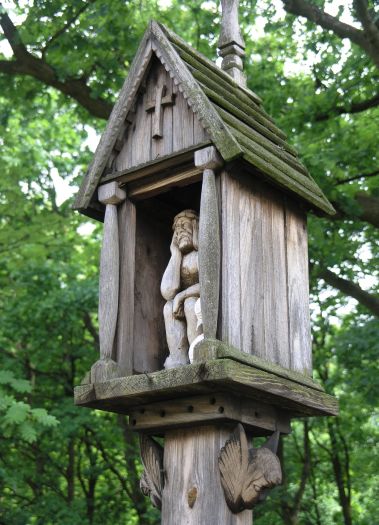 Osiek-nad-Notecią (Osiek-upon-Noteć) is a locality in the Piła District (powiat), situated ca. 40 km east of Piła.

The Folk Culture Museum in Osiek is a regional institution – formally, a branch of the District Museum of Piła. It collects specimens of folk architecture from the areas of Krajna, Pałuki, north of Wielkopolska and the Notecka Primeval Forest.

The Museum’s 13ha area is the site of a reconstructed oval-layout village, typical to the area. Its farmsteads and pens are scenes of reconstructed situations from the late years of 19th and the early 20th century. The objects arriving in this heritage park are typical to any of the region’s construction techniques and structure-related solutions.

The furnishings of individual enclosures and huts have been diversified along the lines of their virtual husbandmen’s and their families’ financial standing, social statute, activities performed on site and the historic period concerned. The equipment, implements and daily-use objects are shown in places and situations as they appeared at a peasant hut and farmstead.

The three exhibition pavilions situated at the village’s periphery have archaeological exhibits on display: the heritage park is situated in a former burial ground, in use between 5th century BC and 4th c. AD.

Folkloristic events, aiming at presenting some of the crafts and skills now falling into oblivion, are the site’s highly-enjoyed attraction.