Your clipboard (0)
Homepage | Catalogue of attractions | The Palace in Dobrzyca 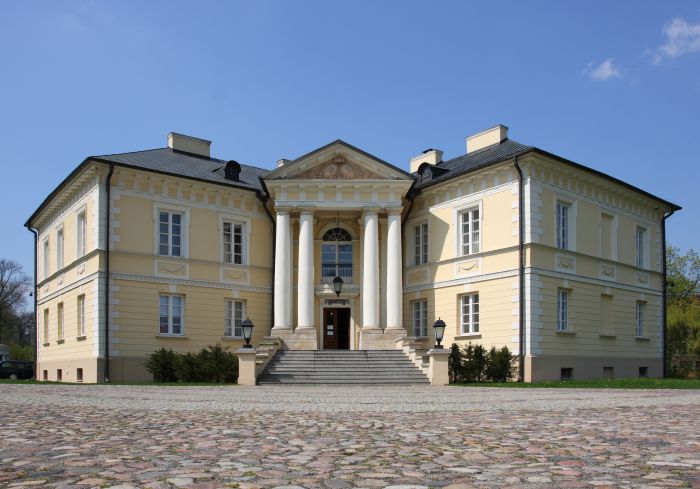 The history of the locality of Dobrzyca (Commune [gmina] & County [powiat] of Pleszew) dates back to the Middle Ages; Mikołaj [Nicolas] of Dobrzyca is first mentioned in 1327. From 1436 to 1453, Dobrzyca was part of Tumlin Dobrzycki of the Leszczyc family. Following the royal consent, he promoted Dobrzyca, in 1440, to a town status (which survived till 1934). It is with Tumlin the knight that the origins of the local seat were associated, relics of which were recently discovered by archaeologist researchers. Composed of a wooden manor and brick turret, Tumlin’s seat was to redevelop, owing to his sixteenth- and seventeenth-century descendants, into a brick-and-stone L-shaped fortalice.

1717 saw Aleksander Gorzeński of coat-of-arms Nałęcz purchase the estate from the Dobrzycki family; it was not until Aleksander’s grandson Augustyn, though, that the then-old fortalice turned into a splendid classicist residence. Married (in 1774) to Aleksandra Skórzewska, daughter of Marianna, a well-known bluestocking, he was allowed to enter the Prussian King’s palace chambers and the peerage of royal Chamberlain. Later on, then already as Aide-General and follower of the Third-of-May Constitution, he remained close to Stanislaus Augustus, the last King of Poland, till the latter’s abdication.

A thorough redevelopment of the old residence, including a garden ornamented with buildings, was entrusted by Gorzeński to Stanisław Zawadzki, a well-known Warsaw architect. The project’s preparatory work (incl. a new manorial farm set up, called Augustynowo) was probably comenced in 1780s, the earliest date mentioning the completion of the palace’s shell being September 9, 1795. The interior’s décor, with the walls covered with rich polychrome staining, refer us to the names of painters Antoni Smuglewicz and Robert Stankiewicz, the latter’s signature having been recently discovered as part of restoration works. Stucco work was applied to a single area inside the palace, referred to as the ‘Blue Parlour’. The signature ‘M. C.’, hidden amongst its wall ornaments, is a sign of the Wielkopolska artist Michał Ceptowski, the date ‘1804’ placed next to it setting the time-limit of the works carried out inside Mr. Gorzeński’s estate.

The two-storey palace, with a basement, ornamented with a giant Tuscan portico, is covered with a flat roof. The palace’s classicist-style lofty solid hides inside it the walls of the Dobrzyckis’ old structure, with its projection’s outline. Despite this, the architect’s genius has yielded a completely new work of art that referred to the then-en-vogue English solutions –in the way it was shaped outside and its interior laid out.

Adjacent to the palace, the garden established as part of the project was embellished with structures favoured by the taste of the time – a tiny annex, artificial ruins called the ‘kasztel’ [castle] (not surviving today), a grotto, a ‘Snail’s Hill’, a pantheon, and a monopteros, built on the heaped-up pond’s isle.

In 1816, as Augustyn Gorzeński died childless, Dobrzyca was inherited by General Kazimierz Turno, who was to die soon after. The estate was held until 1835 by his widow Helena and was thereafter sold to the Kottwitz family, and then on resold to the Bandelow family. In 1890, the estate was bought by Józef Czarnecki; once he died in 1922, it remained in the hands of his widow Stanisława, nee Lipska, and their offspring.

The post-war years have marked a stamp on the complex as a whole. The castle (kasztel) was demolished, as were the team-horse stables, once designed by S. Zawadzki; also the park’s tiny bridges and a water gate were destroyed, the tree-stand culled. Up until 1988, the date the facility was to turn into a museum, attempts were made to rescue the decaying palace – exploited, as it had been, contrary to its actual original purpose – with ad-hoc renovations. The works carried out ever since, not without a number of difficulties, were completed in 2004. The latter date marks the delivery of what is now called the Dobrzyca Palace-and-Park-Complex Museum for use of visitors.