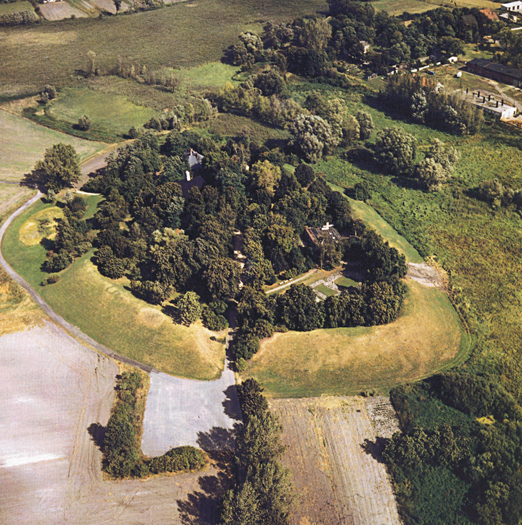 First settlements in this area appeared in 9th century. The following century saw emergence of a settlement complex embracing the castle-town and a few hamlets, situated on an intersection of trade routes. A trade settlement with a church existed in the fore-castle area. In the time of Boleslaus I the Brave (Bolesław Chrobry), Giecz would put out 2,300 soldiers. It was probably in 980s that a palace complex started being constructed there of stone, with a rotund chapel, of the total length 47 m, modelled after the Lednica complex. Its construction was discontinued for unknown reasons, after the stone foundations were laid.

The Giecz castle-town, being one of the most significant such structures in the then Polish state, existed till 1038 when it was destroyed during the incursion of Bohemian Duke Bretislaus I.

The latter half of 11th century saw the castle-town reconstructed and expanded. The Teutonic invasion of 1331, other wars that followed and, finally, the emergence of towns, with trade routes getting rearranged, have eventually resulted in its decline.

In the south of the village, erected is a castle-town embankment whose structure is timber-and-earthen, shape oval, diameters 145 m and 230 m, height 9 m (at certain points), the base 25 m thick; external-line perimeter 625 m. Within the former castle-town area stands a wooden St. John the Baptist’s church, rebuilt after a 1767 fire and restored a few times. The church’s interior is from 18th century. The main altar contains a Wielkopolska-school-authored icon of Our Lady of Consolation, dating to 17th century.

In the course of archaeological works carried out in the church’s surrounding area since 1996, many fragments of an earlier Romanesque edifice, dating to the late 10th/early 11th c., have been discovered. It ensues from the research heretofore performed that it was one of the first-ever churches to be erected in Poland.

In the village, in the former fore-castle area, you will come across a Romanesque St. Nicholas’s church built in 12th century. Its 110 cm-thick wall is faced with granite cubes and, in the corners, sandstone cubes. Traces of sharpening and numerous incisions made with a hard sharp-edged tool are visible on it. A Romanesque sandstone stoup is contained inside, along with a late-gothic wooden statue of Madonna with the Infant.

In the cemetery next to the church, you can find the grave of Stanisław Hebanowski (1820–1898), the outstanding architect who designed, among others, the ‘Polski’ Theatre in Poznań, palaces in Tarce and Posadowo.