Your clipboard (0)
Homepage | Catalog of attractions | St.St. Peter’s and Paul’s Church in Kruszwica 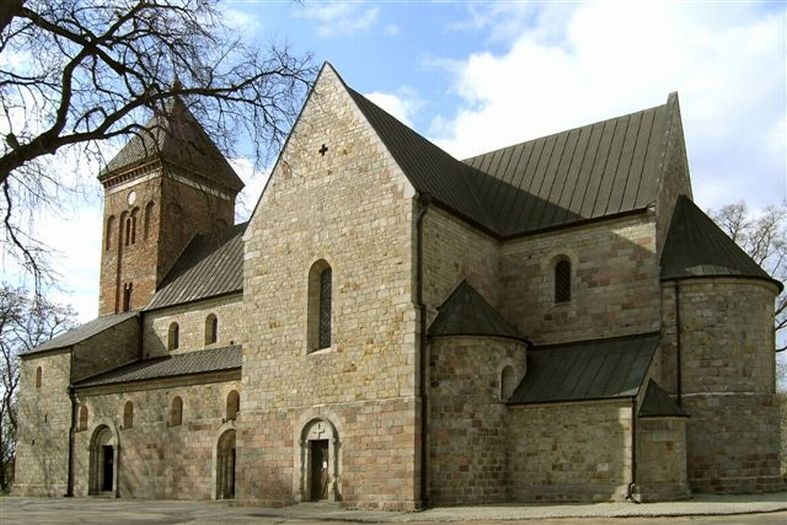 A town situated in the Kujawy-Pomerania Province, District (powiat) of Inowrocław, ca. 16 km south-east of Inowrocław. Kruszwica is an important point on the Piast Route.

By the northern edge of Gopło, on the lake’s eastern shore, Kruszwica’s most valuable historic monument towers – the Romanesque St.St. Peter’s and Paul’s Collegiate Church, built 1120–1140 – the time when a bishop’s seat was affiliated to the church. During the restoration works in 1954–1956, the edifice was cleansed of later-date accretions, reinstating its original, almost purely Romanesque appearance. Pope Paul VI made the Kruszwica Collegiate Church a basilica minor in 1970.

The temple was erected using granite and limestone ashlars. This three-nave basilica-type edifice has a traverse nave (i.e. transept) and is orientated. Three Romanesque portals adorn the church’s southern wall, one of them being furnished with a tympanum with a bas-relief featuring a cross. The church’s outer walls contain Romanesque engravings whose origin remains unclear. The tower’s southern wall features a whirling cross sign – a swastika. The naves and the presbytery are covered by a flat reinforced-concrete timber-coated ceiling, imitating the original temple’s ceiling. The church’s walls were once covered by a polychrome, its floor having been laid with colour-enamel-covered ceramic tiles. The main apse has a stained-glass window dated ca. 1970 and a 1980 copy of a Romanesque altar.

The side apses contain seventeenth-century paintings of Our Lady of Częstochowa and the Holy Cross. The beam supports a late-gothic Crucifixion group from the early 16th century. The transept contains, at the north, a 12th-century Romanesque baptismal font, with a new copper cover. By the portal is a Romanesque stoup fixed in the wall, with small crosses engraved on its periphery. Surviving out of the church’s eighteenth-century baroque outfit are inlaid confessionals and benches. The main nave features two impressive chandeliers: a 16-arm brass chandelier of 1643 and a 20-arm gold-plated one which was donated to the church in 1929. Numerous paintings and other works of art from this Collegiate Church have been deposited at the Archdiocesan Museum in Gniezno.

There are quite a number of statues, monuments and tombstones in the cemetery that surrounds the church on three sides. The baroque statues of St. John Nepomucene and St. Laurence, made ca. 1770, and a monument to Wielkopolska Insurgents of 1918–1919 are among the objects worth the visitor’s attention.