Your clipboard (0)
Homepage | Catalog of attractions | Royal Castle in Poznań 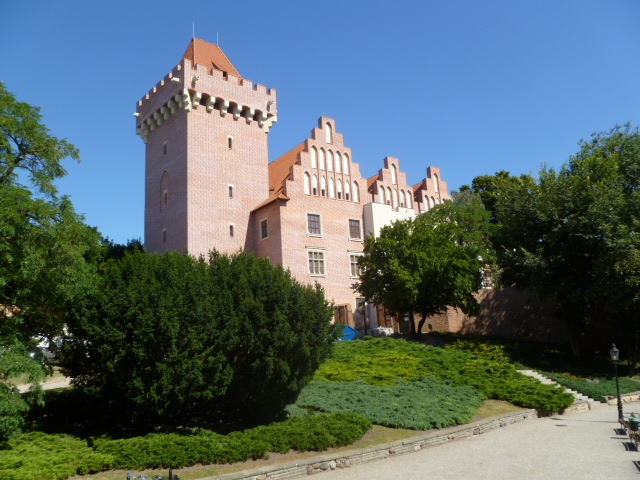 This city on the Warta is the regional and voivodeship capital and the see of the Poznań archdiocese. It is an important point on the Piast Trail.

Construction was concentrated on the south-west side of the hill. A residential tower was raised on a square projection of 11 m x 11 m. There was a gate tower and a bridge in the southern part.

The hill was surrounded by walls from the north, west and south while the high eastern slope was protected by wood and earthen fortifications. The wall from this side was not erected until the 14th century. The interior construction was probably wooden and the residential quarters were situated in the upper levels of the tower with an entrance above ground level.

The rulers of Poland visited the castle. This was also the seat of the general governors of Wielkopolska, the highest royal officials. A 13 m x 15 m rectangular tower with three rooms on every level and a well in the corner was built on the line of walls on the northern edge of the hill during the reign of Kazimierz Wielki (Casimir III the Great). Royal ceremonies were probably held in the double-storey main castle building along the western wall. These included the meeting of Kazimerz Wielki (Casimir III the Great) and the Bohemian king John of Luxemburg (John the Blind) in 1337, and the reception after his marriage to Adelaide of Hesse and her coronation in 1341. Władysław II Jagiełło, Queen Jadwiga, Kazimierz Jagiellończyk (Casimir IV Jagiellon) and Jan Olbract (John I Albert) were all frequent visitors. The last accepted the homage of the Teutonic Knights here in 1493.

In 1536, the castle was destroyed by a fire that nearly obliterated the entire city. It was rebuilt between 1536 and 1551. A three-level brick building with a basement and four transverse roofs with crow-stepped gables was erected. The ground floor had an archive and guest rooms and the first floor had a vaulted great hall. Ceramic floor fragments, brick moulders and sandstone cornices from under the windows are all that is left of the decor of that building.

The castle survived in this form until being damaged by artillery fire during the Swedish deluge. It was rebuilt over the next few years and the daughter of Jan III Sobieski (John III Sobieski) was received here in 1694.

Russian and Saxon bombardment during the Great Northern War drew the final curtain on the castle. The building was used as an aristocratic court and archive after being renovated in 1721 and the ruined tower served as a prison for the aristocracy. A new two-level baroque-classical archive building - now a museum - was erected on the ruins of the northern part in 1783.

A new building was erected on the Gothic basements of the southern part of the castle during the 19th century. This housed the seat of the Prussian regency, then a court, and finally an archive which operated until 1939.

The castle buildings were almost completely burnt down during WWII. Only the walls were left standing. One wing and the “royal kitchen”, i.e. the residential tower on the northern slope of the hill, were rebuilt between 1959 and 1964. Talk of rebuilding the entire castle had been ongoing since the 1950s. A lot of designs were drawn up but none of them ever came to anything.

The Poznań Royal Castle Reconstruction Social Commission was formed in 2002 and launched a design competition to rebuild the castle. The winning design harks back to the shape of the castle after its reconstruction during the 1st half of the 16th century, with its high tower, crow-stepped gabled roofs, and arcaded loggia at the front. Construction is now in progress.

The Museum of Applied Arts, a branch of the National Museum in Poznań, is housed in the building.