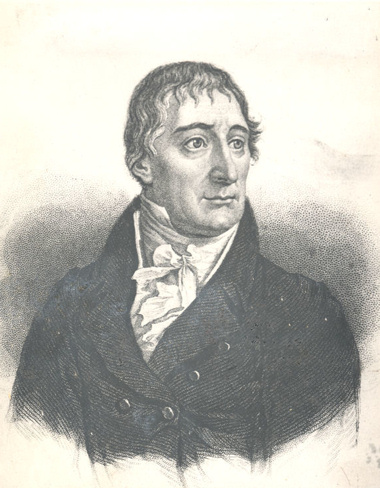 Bogusławski was an actor, stage director, theatrical manager (entrepreneur) and author. He is considered to be the ‘father of the Polish theatre’. He was born in 1757 at Glinno near Poznań (Suchy-Las Commune). During his stay at the Krakow Bishop’s court, he took part in productions of an amateur court theatre.

Since 1778, he was engaged with the National Theatre for good. In 1790–1794 and 1799–1814, he was Director of this Warsaw-based stage; between 1795 and 1799, he ran the Lvov theatre. In the years 1785 to 1790, he performed together with his ensemble in Vilna. Bogusławski was intensely associated with Wielkopolska. The year 1783 saw him establish in Poznań a first permanent theatrical ensemble. Once the group was dissolved, Bogusławski paid a number visits to Poznań.

He also appeared on stage in Kalisz. In 1811, he founded in Warsaw the first Polish school of drama, an institution that has markedly contributed to development of the art of acting. He also authored a two-part acting companion titled Dramaturgia [‘Dramaturgy’]. Bogusławski has comprised his output as an author in a twelve-volume Dzieła dramatyczne [‘Stage Works’] series, which included his memoir Dzieje Teatru Narodowego [‘A History of the National Theatre’]. As a playwright, he wrote Cud mniemany, czyli Krakowiacy i Górale [‘The Pretended Miracle, or, Krakovians and Highlanders’] and Henryk VI na łowach [‘Henry VI A’Hunting’], along with about eighty comedies, tragedies, dramas and operatic libretti.

Bogusławski died 1829 in Warsaw and was buried at the Powązkowski Cemetery. At the place where the Bogusławski’s family manor, now non-existing, once stood, erected is now a monument in the form of a 18-tonne erratic boulder featuring a commemorative plaque devoted to the ‘Polish Molière’— Wojciech Bogusławski.