The Działyński Palace in Poznań 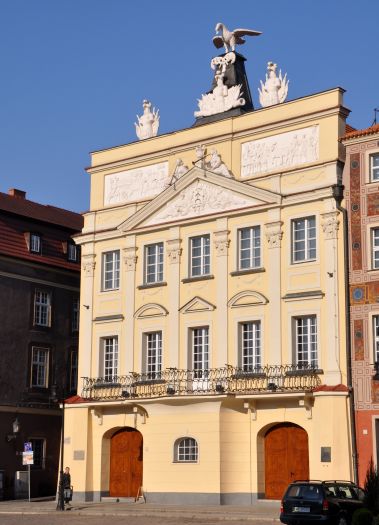 Poznań, the capital town of the region, the Province and the Archdiocese, is situated on the Warta. Poznań is an important stop on the Piast Route.

At the western frontage of the Old Market, your attention will certainly be drawn by the venue’s most spending edifice with a lavish embellishment in its triangular pediment and parapet wall. The building was erected in 2nd half of 18th century, the parapet-wall decoration dating to the same period. The scenes it displays include a triumphant march (to the left) and a sacrificial procession (right). The copestone pelican, feeding his nestlings with his own blood, was meant to be a symbol of the Poles hoping for regaining their reborn – that is, liberated – Homeland.

The palace’s most representative interior unit is the Red Room whose décor, with statues of Kings of Poland, referred to the Commonwealth’s years of splendour and glory. Once Tytus Działyński became the palace’s owner, it grew to become a hub of reinforcing the Polish identity.

On the grounds of the Zakłady Kórnickie’ Foundation established in 1924 by Władysław Zamoyski, the title to the palace, together with the family’s Kórnik and Zakopane estates, was passed to the nation. At present, the palace is home to the Kórnik Library and the National Research Section of the Polish Academy of Sciences.

A living keepsake of the former palace owners is the ginkgo or Maidenhair Tree (Ginkgo biloba L.) whose treetop rises up above Franciszkańska St. It is rather easy to spot and identify, with its characteristic leaves often to be seen on packets containing memory improving medicines.